Lainie was 2 months old and she had never ridden in a car, never been home, never slept in her own crib.

But she had ridden in three ambulances and a jet as her parents, Adam and Julie Ossipove, searched for the right place to diagnose and treat Lainie’s hyperinsulinism (HI).

The family spent two weeks at the hospital where she was born, and didn’t get a diagnosis until more than a week of dangerously low blood sugars had passed.

“The doctors were Googling ‘hypoglycemic’ just like we were,” says Adam. “We decided we needed to get her out of there. We saw the CHOP website and knew we wanted to bring her to Philadelphia.”

Transport to the HI Center at CHOP

As an intermediate step, Lainie was transported by ambulance to the Children’s Hospital of Michigan, where her endocrinologists — who have worked with the Congenital Hyperinsulinism Center at CHOP in the past — were knowledgeable about HI and, when drug therapies didn’t work, agreed CHOP was indeed the next stop.

“They wrote a letter to the insurance company that said, ‘CHOP is the only hospital in America that can treat her to the full extent,’” Julie says. 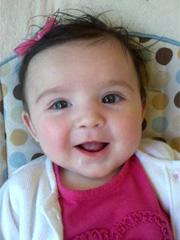 It took another week to get her Social Security number “so we could add her to our insurance and get pre-certified for CHOP,” Adam says. “But the doctors there worked closely with CHOP and followed their instructions to a 'T' so she was stable.”

Lainie’s transport to CHOP by plane was complicated by a blizzard rolling into Detroit, but the skies cleared in time for take-off. Adam came with Lainie; Julie and their 2-year-old flew commercially. They arrived the weekend of the Philadelphia Auto Show, so there were no hotel rooms available anywhere.

“All four of us slept in Lainie’s room that night,” Julie says.

While Lainie was at CHOP, Adam and Julie were watching Good Morning America on TV, and who should they see but N. Scott Adzick, MD, MMM, CHOP’s surgeon-in-chief who was going to be Lainie’s surgeon. Adzick, who also is director of the Center for Fetal Diagnosis and Treatment, was being interviewed about a breakthrough study at CHOP that proved prenatal surgical repair was a standard of care for spina bifida patients.

“It was incredible to know that this amazing doctor was our doctor,” Adam says.

They felt like they knew Adzick even before they got to Children’s Hospital.

“We watched all the videos on the website, and we had everyone we know watch them because they explain HI so well,” Adam says. “We were well-educated when we got here because of all the information on the website. We knew about the genetics, the medications, the surgery. We wanted to become the experts.”

The Ossipoves also felt like if they, as laypeople, could learn about HI, all pediatricians should learn about it as well. They join the chorus of concerned parents who want to push pediatricians in hospitals across the country to know the signs and symptoms of HI so diagnosis and proper treatment happen sooner.

“Everyone around us kept saying, ‘It’s just low blood sugar.’ People don’t understand how important it is,” Julie says.

From delayed diagnosis to cure

Lainie was one of the lucky children whose PET scan showed a clear area of beta cell activity in the head of her pancreas, indicating focal HI disease. She had surgery to remove 15 percent of her pancreas and was cured.

One of the sweetest moments came after Lainie finally had all her IVs and tubes removed.

“I picked her up and spun her around,” Adam says, choking up at memory. “It was the first time I could take her more than 3 feet away from the IV pole. That’s something other people take for granted, but when you’ve been through what we’ve been through, you don’t take anything for granted.”