Priya had a stroke as an infant. Now, as a spirited 14-year-old, Priya's family owes her recovery to the care and support the entire family received at CHOP. Read about Priya's experiences at CHOP, as told by her mother.

My daughter Priya had a rough entry into this world in January 1998. She was born in respiratory distress and developed seizures that would take a week to control.

Despite two weeks in the NICU, we left the local hospital without a diagnosis.

My husband, John, and I were first-time parents and sick with worry about all the usual things (is she eating enough?) as well as over-analyzing every twitch and facial expression, ever on patrol for seizure activity.

Those first weeks, John and I only had each other to share our worries with.

Hip dysplasia: A blessing in disguise 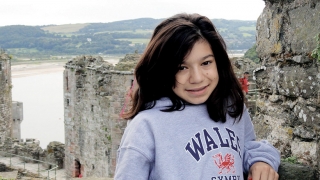 As crazy as it sounds, it was a blessing in disguise that Priya was diagnosed with underdeveloped hip sockets, known as hip dysplasia.

We came to The Children’s Hospital of Philadelphia for treatment and encountered our first supporter, orthopedist John Gregg, MD. Dr. Gregg realized we were frazzled and scared. He had a way that comforted us, yet he explained information thoroughly without sugarcoating it. It didn’t hurt that he adored Priya — and I am sure all his patients.

When Priya had to be in a body cast, she could not be bathed. The cast had to be changed every three weeks under general anesthesia in the OR. Dr. Gregg made sure she was bathed while she was under.

Once the body cast came off, we realized Priya, now 6½ months old, was not moving her legs the same and not reaching for toys with her right arm. An MRI at CHOP revealed she had suffered a stroke sometime around the time of her birth.

We were dropped into the world of "special needs." It sure was a hard landing. This is a place that has its own language and the words are all so long they have to be abbreviated: PT, OT, IFSP, to name but a few.

Since this was a world we didn’t ask for or want to be in, we did everything we could to help Priya without embracing the reality of it. My support at this time came by way of the therapists Priya saw because they understood her physical issues.

Support from other parents

When Priya was 4, I met a mother of another 4-year-old girl who also had a brain injury. It felt like a huge weight was lifted off my shoulders to find someone who really "got it" and understood the daily struggles.

It made sense now why people went to support groups. Sharing a common experience is priceless; it makes you a family of sorts. I joined an online support group where parents of older kids helped me realize that the stroke would impact all aspects of Priya’s life — for the rest of her life.

When Priya was a happy, healthy 9-year-old who loved her brother, music, shopping, horses and hanging out with friends, CHOP opened one of the first comprehensive pediatric stroke programs in the nation.

Knowing how important it was to have a supportive community when dealing with a disability, I was thrilled the program’s social worker wanted to start a support group. The group, started almost five years ago, is run by Lois Robbins, MSW.

We’ve had walks for the American Heart Association, Camden Riversharks games, picnics, conferences and monthly lunches for the group. Lois makes sure there is the right balance of information and fun!

As time went on, Priya’s physical, learning, emotional and behavioral issues became more apparent. I can’t begin to tell you how many specialists we’ve seen over the years. When a friend whose son also had a stroke recommended we see neurologist Lawrence Brown, MD, I hesitated. Since we already had a neurologist or two, adding another one didn’t seem logical.

We went and it was a game-changer.

Dr. Brown, who is co-director of CHOP’s Pediatric Neuropsychiatry Program, understood the complexities of brain injury. He understood where John and I were coming from as parents and also understood Priya’s needs as a preteen.

In 2009, Lois told me about Camp Cranium in Millville, PA. It is a one-week sleepaway camp for children with brain injuries. CHOP doctors, nurses and therapists volunteer at the camp, so the campers have medical care right there.

Priya loves an adventure, so it wasn’t the sleep away part I was worried about. It was the fact she seemed to be nervous around other kids with disabilities.

Priya came back a changed kid. The girl with social anxiety won the "most talkative" award. Her self-esteem soared.

Priya — and John and I — learned that being apart from us, and getting to be herself, was the support she needed to blossom.

Care for the whole family

Now Priya is a spirited 14-year-old who is becoming a lovely young woman. She is involved in chorus, school plays and horseback riding. All year, she looks forward to her week at Camp Cranium.

Our hope is that she continues to find support as she transitions to adulthood.