Having a kidney transplant was always on the horizon for Daniel DiPrinzio. 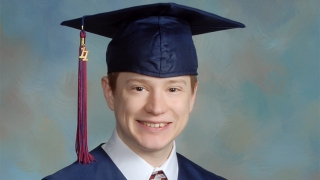 Photo courtesy of Christmas City Studio Diagnosed at 14 months old, Daniel has cystinosis, a rare metabolic disorder characterized by an accumulation of the amino acid cystine in different organs and tissues, leading to severe kidney damage.

At the time he was diagnosed, Daniel had lost one-third of his kidney function. While most cystinosis patients need kidney transplant surgery before they are 10 years old, Daniel’s came much later.

"We've stretched this out 18 years,” says his mom, Julie DiPrinzio, a nurse who works in nuclear medicine. “We knew all along his kidney function would not return, so we feel very fortunate he has come all this way without needing a transplant.”

Time for a kidney transplant

Daniel's kidneys finally reached end-stage failure at the beginning of 2011. He was admitted to CHOP on Jan. 6 and stayed two weeks, during which time hemodialysis began. This method of dialysis happens outside the body, allowing waste and excess water to be removed from the patient’s blood by circulating it through an external filter. Daniel then went on peritoneal dialysis, a similar process involving a dialysis solution used internally, within the abdominal cavity.

During his stay at CHOP, Chris Breen, RN, trained Daniel’s mom, dad and older brother to do the dialysis at home — an “intense” instruction for which they are thankful.

On April 18, 2011, Daniel was activated on the United Network for Organ Sharing (UNOS) waiting list, which has an average wait time of six to 12 months.

Surprisingly, a call came just nine days later in the middle of the night.

Sonya Lopez, MSN, CRNP, the kidney transplant coordinator, called to say there might be a kidney available for Daniel and to stand by for confirmation. At about 6 a.m. she called again and asked the family to come to CHOP with the understanding that there would be some steps to pass through that could prevent the transplant from occurring that day.

"All I kept thinking was, ‘Is this really going to happen?’” says Julie. “We knew what we were walking into when we got the call. We weren’t certain the kidney transplant would actually take place until Daniel was wheeled off to the OR."

Daniel is now enjoying something he hasn't experienced in awhile: good health.

“One thing is I wake up a lot easier in the morning,” he says. Daniel’s previously low energy was the result of his hemoglobin always running low.

For Julie there is relief — and happiness — in seeing her son gain weight and pursue the things he loves. Daniel recently picked up his bass guitar and is working to return to his former skill level. He’s even scouting the neighborhood for new members to help restart his punk rock band, The Failure.

In another 15 to 20 years, it is likely Daniel will need another kidney transplant. Until that time, he will be closely monitored by CHOP, starting with follow-up care several times a week at first, and becoming less frequent over time.

In the meantime, Daniel is going about his life. He recently graduated from Liberty High School in Bethlehem and plans to attend a community college in the fall to study history.

His mom couldn't be more proud.