Sitting in a waiting room at The Children’s Hospital of Philadelphia (CHOP), she’s excited to tell her story and talk about her life, remembering every date and detail, all while keeping her 2-year-old nephew from getting into trouble. You can tell by her demeanor that she had to grow up a lot faster than most kids. 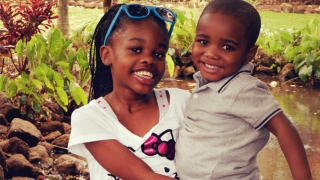 Until a few months ago, Dede had been sick for her entire life. Diagnosed with nephrotic syndrome as a baby, which can be caused by a number of disorders affecting the kidneys, she spent years being treated at CHOP. Doctors were focused on managing her disease to keep her kidneys as healthy as possible for as long as possible.

When she was 10 years old, Dede’s kidneys began to fail.

When the kidneys stop working, they can no longer clean excess fluid, minerals and wastes from the blood. These wastes build up in the body. To replace the function of her kidneys, she was put on peritoneal dialysis in June 2012.

Dede explains how she was hooked up to a machine in her bedroom each night at 7 p.m. The machine would fill her abdomen with a solution that absorbed the waste from her blood, then drained the fluid from her body.

“It felt like water being drained out of a sink.” The process took 8 to 12 hours, leaving just enough time for her to get ready for school and catch the bus in the morning.

Preparing for a kidney transplant

After six months of dialysis, Dede’s doctors recommended that she be put on the United Network for Organ Sharing (UNOS) waiting list> It was time for the last resort — a kidney transplant.

Her family prepared themselves for what could potentially be a long wait. But it was just a week later, in January 2013, that they got the call from their transplant coordinator at CHOP. Dede was in surgery less than 12 hours later.

What followed were three weeks of difficult recovery in the Hospital, and three more weeks at home. That's when Dede started thinking about connecting with her donor family. Her social worker told her that she could write them a letter, and when enough time had passed, an organization called Gift of Life would send it to the family.

Connecting with her donor's family

Dede wasn’t sure whether she would hear back, but she wanted to send her message no matter what. She recalled what she wrote in her letter.

“I said, ‘I just want to say thank you for making the decision to give me this priceless gift.’ I told them how ‘I struggled with my disease for 11 long years, and that when I was recovering it was pretty difficult and I thought I would never get better. But a couple of days went by and now I feel great.’ Then I asked, ‘Did my donor like orange juice? Because now I can’t stop drinking it!’”

It wasn’t long before Dede got a response. She learned that her donor was a young man in his 20s. His mom was happy to hear from her, and asked that she keep on writing.

“I was happy when I got the letter, but sad at the same time,” says Dede.

Wise beyond her 11 years, Dede understands that a lot of sadness came along with the happy gift she received. She also understands how important it is to be a donor.

“Being an organ donor gives kids like me a second chance at a better life,” she says.

Looking forward to the future

With her illness behind her, Dede is excited to focus on happier things, like slumber parties with the friends who were always by her side while she was sick, being back at school with the rest of the fifth graders, playing soccer and basketball next year when she’s 12, and re-decorating her room, now that she can get rid of her dialysis machine.

At the end of a long conversation, Dede was asked if there was anything else it was important that people know about her. She quickly responded, “What I want to be when I grow up! I want to be a journalist.”

She is looking toward the future, and will certainly never forget her past.

Breakthrough stories like Dede's are made possible, in part, thanks to generous donations to the Division of Nephrology. With your support, we can provide innovative care, pioneering treatments and lifesaving cures to more children.