Jude, 2 1/2, likes to play outside. He especially loves running and riding his scooter. It’s an amazing thing for his parents to watch, because Jude spent his first 15 months in and out of the hospital until a liver transplant restored his health.

When Jude was 4 weeks old, he started having seizures. His parents, Nicole and Josef, brought him to the emergency room at their local hospital in south Florida, where a CT scan showed bleeding in his brain. Surgery was performed to remove the pooled blood. He was also given a blood transfusion and an injection of vitamin K to promote normal clotting.

Diagnosis with a genetic disorder

Trying to understand what had caused the bleeding, his doctors found that Jude’s liver enzymes were elevated. They also initiated genetic testing. The genetic test results came back showing that Jude had alpha-1 antitrypsin deficiency, an inherited disorder. People with this condition typically do not show symptoms until they are adults, when underproduction of the alpha-1 antitrypsin protein begins to affect heart and lung function. In Jude’s case, the disorder was causing him to produce an abnormal form of the protein, which was accumulating in his liver and interfering with its function.

When Jude was 22 months old, his liver problems worsened. “His belly started getting bigger,” says Nicole. “It looked like he had swallowed a balloon.” Imaging studies showed that blood was flowing out from his liver, rather than into it, a condition known as portal hypertension. He was put on a water pill to reduce the swelling, and given treatment to induce diarrhea in an effort to purge his body of toxins. But the doctors explained that these treatments would not fully resolve his problems. Nicole and Josef were told that Jude would need a liver transplant.

Nicole started doing research on liver disorders in children. That led her to connect with other parents of children with liver conditions on Facebook, and then to a walk in a local park with one of these mothers.

“She told me that we didn’t have to stay in Florida for Jude’s transplant. And she told me about Children’s Hospital of Philadelphia (CHOP).”

A trip to Philadelphia

As the family continued their research, CHOP continued to jump out as a center of expertise, as the Liver Transplant Center at CHOP is one of the largest pediatric liver transplant centers in the country. The family made an appointment to bring Jude to Philadelphia for a second opinion.

The family came for a week of scheduled tests and consultations. CHOP’s social work team helped the couple make arrangements to stay at the Gift of Life Family House, a nonprofit “home away from home” for transplant patients and their families. As it happened, Jude did not stay with them. He was admitted to CHOP with a high fever on the first night of their visit.

The doctors found that the fever had come from an infection in the fluid that had built up in Jude’s abdomen, which was the cause of his swollen belly. A nutritionist also found that Jude was malnourished, an issue that had not been noticed before.

By the end of the week, Jude was on different medications and a feeding tube. The parents were impressed by the depth of the expertise at CHOP and decided to proceed with the liver transplant here.

“Everyone was warm and welcoming,” says Nicole. “They were great with all of us. They even had a Child Life specialist spend time with Josiah (Jude’s brother).”

Jude was put on the transplant list the following month, when he was 2 years old. Jessica Wen, MD, a pediatric gastroenterologist at CHOP with special expertise in treating children with liver disorders, led his medical team over the next few months, as he waited for a suitable donor.

Nicole stayed in Philadelphia with Jude and Josiah. Josef, a member of the Air Force, went back to Florida until he received a humanitarian transfer to a nearby base in New Jersey a few weeks later.

“Jude was in and out of the hospital constantly,” says Nicole. “He kept needing to be fixed up.” He had weekly infusions of albumin and Lasix (furosemide), until those treatments stopped working. Then he had a procedure called paracentesis to drain the fluid from his abdomen.

“It was not an easy thing to watch as he got sicker and sicker,” she says.

“But I had confidence in the medical team at CHOP. They knew what to watch for and what to do. ”

At the end of July, when Jude was 2 years and 3 months old, the family was alerted that a donor liver was available. He went into surgery just before midnight and was wheeled into recovery with his new liver at 8 the next morning. Kim Olthoff, MD, Director of the Surgical Liver Transplant Program at CHOP, performed the transplant procedure.

“Now we had that healthy kid again” 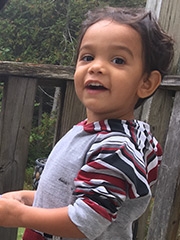 “It went beautifully,” says Nicole. “He was out of the hospital in 11 days. He was a rock star. We had forgotten what the healthy Jude was like — it had been so long. Now we had that healthy kid again.”

Jude gradually eased back into activity. A month after the transplant, he was able to run around outside. At first, he would sit and rest after a short burst of running, until he realized he still had energy and would get up and continue.

Now 2 1/2, Jude is still happy to be able to run and to ride his scooter outside. He loves music and dances with natural rhythm. He enjoys playing with toy racing cars with his older brother. He has a special passion for Lightning McQueen, a character in the Cars movie. “He’s a very focused kid,” says Nicole. “He’s easy-going until there’s something he doesn’t agree with. Then he can be very feisty.”

Looking back on their journey, Nicole remembers the turning point: “The day they told us they had a liver for him. Seeing the look on Dr. OIthoff’s face when she described what would happen, I could tell she was confident it would go well. I was very confident in the medical team. I felt, ‘This is it.’ We could finally breathe again.”

“Watching Jude play outside, seeing his energy now, is an amazing thing,” she says. “He was miserable all day, every day for months, until the transplant. Now he’s a normal kid and loving it.”