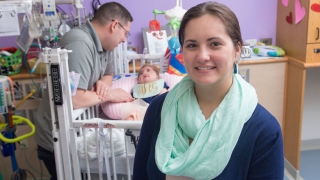 Deborah Acerno with her husband, Tom, and daughter, Adeline When Deborah Acerno watched her daughter sleep in the Harriet and Ronald Lassin Newborn/Infant Intensive Care Unit (N/IICU) at CHOP, she knew she had done everything possible to restore little Adeline’s health. That included feeding her breast milk, because for the sickest babies, human milk is more than food — it’s medicine.

The Mothers’ Milk Bank (MMB) allowed Acerno to contribute, in an important way, to the health of other babies in the N/IICU. She donated her extra milk to the MMB, making it available to infants whose mothers could not produce enough.

Acerno and her husband, Tom, came to the Center for Fetal Diagnosis and Treatment at CHOP when they found out their unborn baby had a hole in her diaphragm, a life-threatening birth defect. Adeline was born in the Garbose Family Special Delivery Unit and stayed in the N/IICU.

Human milk strengthens an infant’s immune system, boosts development of the digestive system, and results in better neurodevelopmental outcomes. The American Academy of Pediatrics recommends that all infants receive human milk exclusively for their first six months. The benefits of human milk are especially important for infants who are critically ill, recovering from surgery or otherwise at risk.

Acerno saw another benefit. “Breast milk is much easier for Adeline to digest,” she said. “Once she started receiving my milk at about a month old, it made a big difference in how comfortable she was.” Adeline is received her mother’s milk exclusively, and Acerno is produced more than her baby needs. When CHOP opened its Mothers’ Milk Bank, Acerno became the first donor mom.

“If another baby can benefit, I want to help,” Acerno said. “It would be a shame if my extra milk went to waste.”

CHOP’s Mothers’ Milk Bank, the first in Philadelphia, provides pasteurized donor milk to any infant hospitalized at the Main Building who needs it. The MMB is accredited by the Human Milk Banking Association of North America. Donors, who are not paid, go through a six-step screening to ensure that their milk is safe.

CHOP has offered pasteurized donor human milk to hospitalized babies in need since 2006. The CHOP MMB as dispensed more than 100,000 ounces since 2015 and is grateful to the families who donate to help other babies in need. 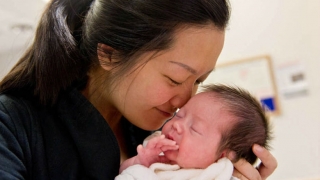 Philanthropic donations of all sizes help the Breastfeeding and Lactation Program provide resources and support for mothers breastfeeding or pumping their milk.