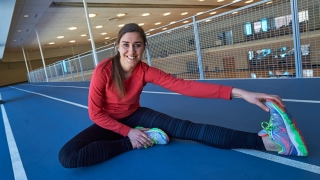 Thanks to a specialized hip program at CHOP, a recent Drexel grad is back to her active lifestyle, pain-free.

Running has always been important to Stephanie Zeitz. Her parents were avid runners, and she inherited their passion, running cross country and track all through high school.

But beginning in her freshman year of high school, running for Zeitz meant putting up with pain in her left hip.

“The pain would usually start in the middle of a run,” she recalls. “It would basically feel like someone was stabbing me in the hip, and it would last for hours afterwards. By the end of a race, I was usually in tears.”

She tried to ignore it. Then she tried going to a chiropractor. But by the end of freshman year, the pain was so bad that she sought out an adult sports medicine physician at a nearby hospital. He diagnosed her with acetabular dysplasia, an abnormally shallow hip socket that leads to excessive pressure on the rim of the hip. The condition affects approximately one in every 1,000 children but in many cases goes undetected until adulthood.

The physician told Zeitz the only treatment option he could offer was a hip replacement once her natural hip had deteriorated, which would probably be in her 30s. In the meantime, he said, if she wanted to run, she would just have to cope with the pain.

Understandably upset by this news, Zeitz went to The Children’s Hospital of Philadelphia’s Division of Orthopedics for a second opinion.

The CHOP team managed Zeitz’s pain symptoms conservatively, with rest, physical therapy and a gradual return to running. This approach worked for a while, but the results didn’t last. By the end of her freshman year at Drexel University, Zeitz was in constant pain, whether she was running, walking, standing or sleeping. She returned to CHOP in the hopes of finding a solution that would take the pain away for good.

Fortunately, orthopedic surgeon Wudbhav Sankar, M.D., an expert in treating hip conditions in children and young adults, had recently arrived at CHOP and created the Young Adult Hip Preservation Program, a unique program designed to treat complex hip disorders in young adults ages 15 to mid-30s. Rather than replacing the natural hip with an artificial one — as most adult providers do — the Young Adult Hip Preservation Program seeks to avoid hip replacement by enhancing or reconstructing the natural hip and hip socket.

Sankar has special expertise in a relatively new, technically difficult procedure called the Ganz periacetabular osteotomy. This surgery — used to treat acetabular dysplasia — repositions the hip socket and preserves the natural hip joint. Patients can return to an active lifestyle, and in many cases it eliminates the need for an artificial hip replacement later in life.

“Dr. Sankar gave me an alternative that I never thought possible,” says Zeitz. “I was really excited to be able to experience life pain-free.”

Five days after surgery, Zeitz went home on crutches. During her 10 weeks of recovery, she slowly began rebuilding her strength through physical therapy.

Just four months later, she was running again; in six months, she was training for the 10-mile Broad Street Run, a distance she hadn’t been able to run in years.

“It was the hardest thing I’ve ever done, getting myself from not being able to walk to being able to run 10 miles,” she says. “It was an amazing feeling to cross that finish line and stop running and not be in pain.”

Zeitz recently graduated from Drexel with a dual bachelor’s-master’s degree in education and is back to her active lifestyle. Since surgery, she has done the Broad Street Run three times, has run three half-marathons, and ran the Philadelphia Marathon — her first — last fall. She is now training for this year’s Philadelphia Marathon in November.

“Stephanie is doing great,” says Sankar. “She’s back to doing what she loves, which is running. Seeing Stephanie being active is the best feeling as a physician. It’s really what you wake up for in the morning when you come to work. You just want to make people better.”

Zeitz adds, “I can’t say enough good things about CHOP. From the nurses to the receptionists, to physical therapy to Dr. Sankar, to everybody involved in the surgery — and there’s a huge team — they changed my life.”