Published on Dec 01, 2016 in Philanthropy Report

Most teenagers can’t imagine spending their summers fighting a lifethreatening disease, but in 2010, Richie Suarez and Carly Stephens met under those remarkable circumstances at Children’s Hospital of Philadelphia. They each successfully battled cancer, and each is now “paying it forward” by raising awareness for pediatric cancer research. 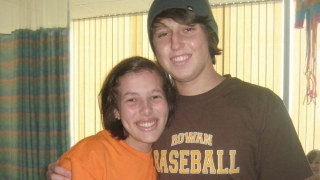 Suarez was diagnosed with high-risk, pre-B acute lymphoblastic leukemia (ALL) two days before beginning his freshman year at Rowan University, where he planned to study math and play NCAA baseball. Instead of starting his first college courses, he lay in a hospital bed learning about the numerous medications needed to fight his disease. Around the same time, 15-year-old Stephens was preparing for a family trip to the Outer Banks in North Carolina when she learned she had acute myeloid leukemia (AML). The two became friends as inpatients on CHOP’s oncology unit that summer — enduring rounds of chemotherapy and the painful side effects, and sharing their dreams to return to their beloved sports and schools.

After years of treatment and a double hip replacement for Suarez, both are now in remission and embarking on careers in healthcare inspired by their experiences at CHOP. Suarez is attending Rowan’s Cooper Medical School to become a pediatric oncologist, and Stephens is studying psychology at West Chester University for a career in child life. Defying physical challenges, Suarez even served as starting pitcher for the Rowan University baseball team as he’d originally planned.

In addition to sharing similar diagnoses and career choices, Suarez and Stephens have both turned their experiences into advocacy for pediatric cancer research. The Suarez family planned a Striking Out Kids’ Cancer Baseball Tournament of Champions in 2014, and Richie often shares his story at CHOP fundraisers and events. The Stephens family founded the KickLeuk Foundation, which hosts soccer, golf and whiffle ball tournaments and has contributed more than $160,000 to the research of Richard Aplenc, MD, PhD, MSCE, to develop an immunotherapy treatment for AML.

“I’m so proud of my parents,” says Stephens of her family’s fundraising success.

Children’s Hospital of Philadelphia is even more proud to see patients like Stephens and Suarez healthy again and teaching others about the importance of pediatric cancer research.