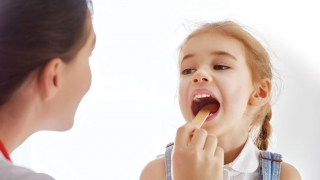 I asked world-renowned OSA expert Carole Marcus, MBBCh, director of CHOP’s Sleep Center, to weigh in on this condition and recent research findings related to its treatment.

OSA is a disorder in which the throat muscles relax too much during sleep. As a result, the airway periodically narrows or closes, which can restrict airflow and reduce the amount of oxygen reaching the brain. The body reacts to low oxygen levels by sending warning signals to the brain to wake the sleeper up enough to resume normal breathing. This process can happen 30 times or more an hour during a single night’s sleep, preventing someone with OSA from ever reaching deep sleep, though the person is often completely unaware of the sleep disruption. The most noticeable sign of OSA is snoring.

Though it most commonly affects adults, 1 to 3 percent of all children have OSA. Left untreated, OSA can have a significant negative impact on a child’s quality of life. Health consequences include failure to thrive, bedwetting, attention-deficit disorder, poor academic performance, behavior issues, daytime sleepiness, difficulty concentrating and cardiopulmonary disease.

Given the small size of a child’s airway, surgical removal of the adenoids and tonsils (adenotonsillectomy) can play an important role in relieving the obstruction and improving airflow. Despite the prevalence of this treatment in children with OSA, its usefulness in reducing symptoms and improving quality of life hadn’t been rigorously evaluated until the Childhood Adenotonsillectomy Trial, a major study led by Dr. Marcus. The trial recently found statistically significant improvements in behavior symptoms such as anxiety and shyness, quality of life and sleep apnea occurrence.

Dr. Marcus cautions, however, that like any surgery, adenotonsillectomy is not without risks. Complications can be serious, including postoperative bleeding, breathing issues and even death. The more severe a child’s OSA, the more likely he or she will have complications.

A sleep study, called a polysomnogram, is the gold standard to confirm an OSA diagnosis and determine its severity, but many clinicians perform the surgery without such an evaluation. CHOP’s Sleep Center recommends that children suspected of having OSA undergo a full-night sleep study to determine the risks and rewards of performing the surgery.

Dr. Marcus and her team in the Sleep Center continue to investigate the benefits of adenotonsillectomy in sleep-related airway obstruction. They are now embarking on a study to determine if snoring — which, beyond being a sign of OSA, might be a separate problem that can cause behavioral issues — could be helped by adenotonsillectomy. More to come on that, I’m sure.