A family's gift will make a difference for generations to come 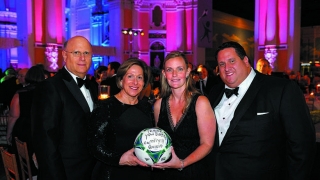 Every family has had important conversations at the dinner table, but this one literally was historic.

Reid Buerger sat down with his wife, Krista, his parents, Connie and Alan, and his brother, Grant, to suggest that they should give away a fortune to help CHOP build a revolutionary new medical facility.

The Buerger family, living in the Philly suburbs, had been longtime supporters of CHOP and had made big gifts before to several charities, but what they were considering was much larger. At $50 million, it would ultimately be the largest gift in CHOP’s history.

The idea was sparked four years earlier when Krista was pregnant with their first child. “Becoming a parent changes the way you see the world,” Reid says. “I began thinking about what it meant, not just to my family but the greater community, to have a place like CHOP here in our backyard. I wanted to learn more and become more involved.”

He began volunteering to serve on committees, meeting with hospital leadership and eventually joining the Board of Trustees. He spoke with CEO Steven Altschuler, MD, about the Hospital’s most critical needs. Altschuler showed him the plans for CHOP’s new state-of-the-art outpatient center.

“When I looked at the renderings,” says Reid, “I didn’t see glass and steel. I saw a place that could change the lives of children and their families forever. That’s when I started talking to my family about doing something special to make the center a reality.”

Connie and Alan Buerger founded Coventry, which created the secondary market for life insurance and pioneered the resulting life settlement industry. As business leaders, their accomplishments are legion.

“Giving back to the community has always been very important to us,” says Alan. “We focus our philanthropy on medicine, education and the military.”

“CHOP holds a special place in our hearts,” says Connie. “Our sons went there, our grandchildren go there now. There are few words that can adequately describe the impact they have on the lives of so many children and their families.”

On June 25, the Hospital announced the $50 million gift from the family and publicly unveiled plans for its new state-of-the-art outpatient building, named in their honor: the Buerger Center for Advanced Pediatric Care.

“One wonderful part of this experience is the stories we’ve heard,” says Connie, “from friends, employees and even strangers, telling us how CHOP has touched their lives, whether it’s been their children, nieces, nephews or friends’ children — it’s really extraordinary.”