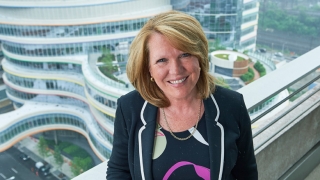 With more than 25 years at The Children's Hospital of Philadelphia, Madeline Bell is a respected leader with a new role: CEO.

For as long as Madeline Bell can remember, she wanted to be a nurse. A photo of her taken at 3 years old shows her sitting under the Christmas tree, smiling with her freshly  unwrapped toy nurse’s kit. If another child were injured on the playground, Bell was always the one to say, “Let me have a look at that cut.” 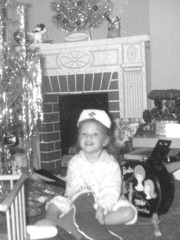 As an undergraduate at Villanova’s College of Nursing, Bell briefly intended to become a doctor instead, but the dean implored her to reconsider: “There won’t be any leaders in nursing if everyone goes into medicine.”

Little did the dean know, Bell would become not only a leader in nursing but also the leader of all 12,000 employees at The Children’s Hospital of Philadelphia. On July 1, Bell traded her role as president and chief operating officer (COO) for CHOP’s ultimate corner office: president and chief executive officer.

Bell is no stranger to the organization, having worked at CHOP for 26 years of her 32-year career, but her ties go back even further. “My dad did fundraising for CHOP when I was in high school, and I got involved, too,” she recalls. “I came to CHOP for check presentations and was so impressed. I knew then that CHOP was the only place I wanted to work.”

Bell’s wish came true in 1983 — but it almost didn’t. Applying as a college senior, she was waitlisted for a nursing job at CHOP. Months later, she was offered a job, but with conditions: She had to begin immediately after graduation and work nights only. She jumped at the chance. “It was not the best schedule for my social life, but I wanted to work here so badly,” she recalls. Eventually she transitioned to days, moving into home care and discharge planning.

Nancy Dixon, B.S.N., R.N., a nurse in the Harriet and Ronald Lassin Newborn/Infant Intensive Care Unit, worked with Bell in the early 1980s and often carpooled with her to work. “Every day, Madeline had a big smile on her face and came in with a positive attitude and great work ethic,” recalls Dixon. “She would do whatever it took to help the patient. She still has that great attitude.”

But Bell also felt like she had more to contribute.

“I knew that I wanted to be part of influencing the healthcare system and not just doing healthcare delivery,” says Bell.

In 1989, she was recruited to an administrative position at Main Line Health, but Bell found herself missing the sense of mission she felt at CHOP. And so in 1995, she returned to lead Home Care and Case Management. Since then, she has taken on one challenge after another, moving first from assistant vice president to vice president, then to executive vice president and COO in 2007, and adding the title of president in 2010. As president and COO, Bell was in charge of operations for the entire CHOP system.

In May, the Board of Trustees unanimously voted Bell the next CEO. Now she is focused on driving the Hospital’s strategic growth and helping to tell CHOP’s story to philanthropists and elected officials.

When Bell began at CHOP in the 1980s, there was no CHOP Care Network —CHOP was a single building. Now, due in no small part to her efforts, there are more than 50 locations, and CHOP has extended its reach through partnerships with numerous other hospital systems. Weighing the costs and benefits of future expansion will be very much on Bell’s mind as CEO.

Philanthropy is also key on her agenda, and she speaks about it passionately. “I want to be part of making CHOP hands-down the charity of choice for Philadelphia and beyond,” she says. “What better cause is there than to give to children, the architects of our future?”

In July, she was able to tour the Buerger Center for Advanced Pediatric Care with Alan and Connie Buerger, whose family’s $50 million donation helped make it possible. “It is a beautiful building, and to watch their faces as they saw it nearly complete was just so rewarding,” she says.

While she has turned over the nitty-gritty of day-to-day Hospital operations to an interim COO, Bell will remain front and center on several issues that she has helped to drive at CHOP: patient safety, performance improvement, patient engagement, and diversity and inclusion.

“Madeline really understands healthcare,” says former CEO Steven M. Altschuler, M.D. “She’s formed excellent relationships with staff at all levels of the Hospital, as well as trustees and donors. She understands and respects the Hospital’s culture and traditions, but she is willing to make the changes that are necessary to help the Hospital thrive in the future.”

It is also clear that family plays a big role in Bell’s life, and she credits her own for keeping her grounded. She is married to Louis Bell, M.D., chief of the Division of General Pediatrics (see his latest Children’s View column). Both formally and informally, they have agreed to keep their work and personal lives separate. “We have seven of the most interesting children you could hope for,” says Bell with a laugh. “They give us plenty to talk about!”

Bell’s emphasis on family also shines through in her work. She has long been a champion of making CHOP a family-centered environment, incorporating patient family feedback in everything from the design of the Buerger Center to the selection of patient pajamas. She relishes opportunities to speak with families and hear their stories.

“If I get frustrated with my own work, I go over to the Hospital and interact with a family or a front-line nurse or physician,” she says. “The best moments are hearing those stories. It gives you a heavy dose of perspective on what really matters. They are CHOP’s mission in action.”