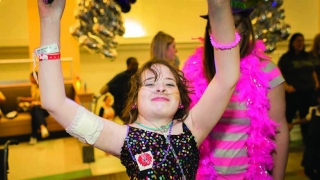 It was an evening straight out of Hollywood. Decked out in gowns and suits, the night’s celebrities paraded down the red carpet, under the balloon archway, past the “paparazzi” photo station. No detail was overlooked to make the seventh annual Joshua Kahan Prom at The Children’s Hospital of Philadelphia an evening to remember for children and families alike.

The theme was “A Night of Stars,” and numerous television cameras were on hand as 100 patients partied alongside their families, clinicians and the Child Life team.

Preparing for the prom was an elaborate affair, with dresses and suits in every size made available for patients. Stylists also curl and coiff hair, apply makeup and paint nails. It took more than an hour for Marjorie, 16, to style her look. She wore a peach chiffon gown and accessorized with a pair of black and orange Nikes.

The dance floor was packed with children, grooving to such hits as Psy’s “Gangnam Style” and the Black Eyed Peas’ “I’ve Got a Feeling.” Child Life further decked out the dancers with colorful tutus, LED-lit bowler hats, and green and pink feather boas. IV poles and wheelchairs? Just another accessory!

Anyone tired or hungry from dancing could sample the buffet of burgers, chicken fingers and mini pizzas. A dessert station with Rita’s Italian ice and a cake with mounds of white frosting were also on hand for the prom-goers.

Open to patients of all ages, the prom is made possible every year by the Joshua Kahan Fund. Its founder and president, Jeffrey Kahan, was there and clearly having a blast.

“For one night, nobody’s sick,” he said, looking at the happy faces around him. “Everyone has a smile. They’re not in a hospital, nor are their parents. The kids and families can get back to having fun.”

One of the youngest attendees, 5-month-old Jayden, might have been too young to understand prom, or even why he was in the Hospital. But whether it was the LED-star wand firmly in his grasp or the scene of joy around him, one thing was for certain: He had a twinkle in his eyes.