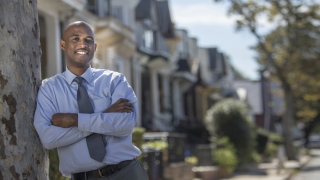 As a child growing up in Atlanta, Roy Wade Jr., MD, PhD, MPH, assumed he would follow in the career footsteps of his father, a Baptist minister. Often he would join his father on visits to parishioners who were sick or shut in.

What he saw surprised him: a disproportionate number of people who seemed too young to have such complicated, chronic diseases. He knew there must be a connection between poverty and the illnesses he was seeing. Why were these African-Americans, who should be in the prime of their lives, suffering heart attacks or losing limbs to diabetes?

When Wade settled on medicine as a career, he knew he wanted not only to treat disease but also to put young people’s lives on a healthy trajectory to avoid disease in the first place. To do that, he became a pediatrician and a researcher.

Wade, who sees patients at CHOP’s Cobbs Creek Primary Care Center, also studies how growing up in low-income urban neighborhoods can create unhealthy stress in children’s lives — stress that has been linked to major health problems in adulthood.

His work builds on the foundation of the 1998 Adverse Childhood Experiences (ACE) study, which showed that the more traumatic events, or “ACEs,” a person experienced in childhood — things like domestic violence, sexual abuse, drug use in the home or parental divorce — the worse his health was likely to be later in life. This included not only an increased likelihood of substance abuse or mental illness, but also higher rates for diseases like diabetes, cancer or heart disease.

But while the ACE study looked primarily at middle-class adults, it failed to capture many of the factors Wade suspected would be traumatic to urban youth. “If you think about growing up as a minority, what is the impact of discrimination and prejudice on health?” Wade asks. “What about things like community violence and other neighborhood-level stressors?”

In a paper published this summer in the journal Pediatrics, Wade and his co-authors, Judy Shea, PhD, David Rubin, MD, MCSE, and Joanne Wood, MD, MSHP, interviewed young adults who had grown up in neighborhoods with high poverty levels to find out what had been stressful in their childhoods. Each then was asked to choose their personal top five.

While many, such as substance abuse in the home or physical abuse, overlapped with the ACE study, several commonly cited stressors were new, including single-parent homes, neighborhood crime and violence, economic hardship, and discrimination.

Creating a tool to uncover trauma and address it earlier

Thanks to a three-year grant from the Stoneleigh Foundation, Wade and his team are now building an assessment tool — essentially a list of carefully worded questions — that pediatricians everywhere can use to identify childhood traumas early, so that these children can be better connected to the support and resources they need.

The researchers now are interviewing younger children to better understand how they think about their own difficulties.

“We need to capture the language our kids use to describe these experiences and make those into questions,” explains Wade. “Our work will be grounded in the experience of children. They’re the experts.”