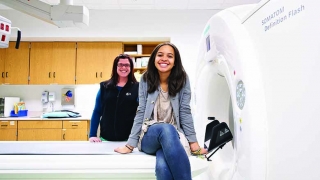 As she prepared to attend her senior prom in May, 18-year-old Callie Monroe worried that her bright red gown wasn’t exactly right. She planned to wear her hair in a side-swept updo and worried that it wasn’t the perfect look. But one thing Callie doesn’t worry so much about as she heads off to Wesleyan University in Connecticut is the radiation she has been exposed to during dozens of X-rays at CHOP.

Since Callie was 7, she has come to CHOP many times to be treated for pneumonia, which she seemed to get almost annually. And each visit meant heading to Radiology for imaging exams.

The Radiology unit performs more than 210,000 imaging procedures each year. Many help diagnose and treat pediatric cancer, cardiac and neurology patients whose complex diseases require constant imaging. While these tests are vital for diagnosis and treatment, X-rays and many scans expose a patient to radiation, which can contribute to long-term health problems.

“We know that the less radiation we give, the better it will be for patients,” says Diego Jaramillo, MD, MPH, CHOP’s radiologist-in-chief and a founding member of the Alliance for Radiation Safety in Pediatric Imaging. The organization has established nationally regarded “Image Gently” guidelines that advise keeping radiation doses as low as reasonably achievable.

Whether a patient needs to turn to radiology frequently or just once, less radiation is always better. This is especially true for children, because they are smaller and their cells multiply faster than adults’. While many hospitals use the same amount of radiation for kids and adults, CHOP takes a more fine-tuned approach. In fact, the department’s focused effort has led CHOP to offer more low-dose options than any other hospital in the region.

When the Radiology unit moves to CHOP’s new Buerger Center for Advanced Pediatric Care, it will bring the already state-of-the-art center even more up to date, with the newest equipment across the board, including the EOS, a cutting-edge tool that can create an extremely detailed image while using much less radiation than an X-ray. CHOP has the only EOS machine in Pennsylvania.

It has now been two years since Callie has needed X-rays or other imaging at CHOP, and she hopes this positive trend will continue. Both Callie and her mother, Tracy, take comfort in knowing that if Callie does need its services, the Radiology unit is just a drive away from her school.

“There’s no other hospital where I would feel as confident in Callie’s care,” says Tracy.