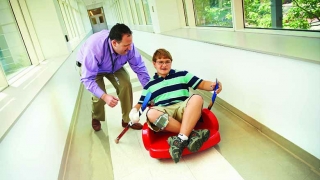 One winter morning, Paul Tursi told his kindergarten teacher that his eyes hurt. Two hours later, when he started clutching his head in the lunchroom, his teacher discovered he could no longer speak or use his right arm. Paul had had a stroke.

Paul, now 14, has spent the past 8 years working to overcome the resulting weakness on his right side. He has come a long way in that time.

The shy, quiet child who couldn’t move his right arm at all is now a straight-A student who goes to Boy Scouts, takes karate lessons and plays on a sled hockey team — all with the support of his parents, Kathy and Paul Sr., CHOP’s Pediatric Stroke Program and the Hospital’s rehabilitation specialists.

Occupational therapist Todd Levy is among the team who worked with Paul since the beginning of his journey back from the stroke. Along the way, Levy adapted a hockey stick with a special grip so that Paul could take a slap shot even without full use of one arm.

Physical and occupational therapists used Bioness neurostimulation devices with Paul, initially to help him lift his right foot when he walks, and more recently to help him open his ordinarily tightly clenched right hand. Paul was one of the first patients at CHOP’s Occupational Therapy Outpatient Clinic to use a Bioness device on his hand; after just a few weeks of using it, Paul’s hand was more open and relaxed.

“It’s a weird tingly feeling, but I like it,” Paul says about the device, which stimulates the nerves in his hand with electrical impulses. “When I got it, my hand was tight, but now it opens, so now I can spar in karate with both hands.”

For patients like Paul, whose care requires coordination between multiple outpatient clinics like occupational therapy, physical therapy and speech therapy, the new Buerger Center will make his visits more convenient, as these specialties will share space.

In addition, many features in the building will enhance care: The new rehab gym will be twice the size of the current one, with a two-story climbing wall and floor-to-ceiling windows overlooking the landscaped plaza.

Occupational Therapy will have a larger kitchen for practicing activities of daily living, as well as more private treatment rooms. Rehab sessions can also roam farther afield; both the two-story lobby ramp and a path within the building’s roof garden will be designed for use with rehab patients.

“Having a space that’s designed to improve interactions should be very helpful in coordinating care,” Levy says. “And having more room to work will make a big difference.”

As for Paul, he says his hard work at the rehabilitation clinics has paid off. He used to come in for intensive therapy every week, but with his parents helping him practice his exercises regularly at home, he has been able to taper off to monthly visits.

In everything from sports to playing games on his iPad, he says, “I can tell I’m getting better.”