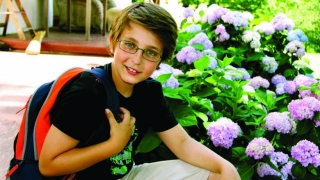 When Phoenix Logan failed his first newborn hearing screening, his mother, Lexi, took the news in stride. When he failed it a second time, she started to get anxious. At 3 weeks old, Phoenix was given a final test — and he failed again.

“It was like someone ran over me with a Mack truck,” recounts Lexi.

As time went on, her worst fears were confirmed: Phoenix became profoundly deaf, and hearing aids couldn’t help him. That’s when his parents turned to CHOP and its Cochlear Implant Program.

A cochlear implant is an electronic device that bypasses damaged parts of the inner ear (cochlea) and directly stimulates the auditory nerve. It consists of an external component that sits behind the ear as well as an internal component that is surgically placed under the skin.

The implant does not restore normal hearing but instead gives a deaf person a useful representation of sounds in his or her environment. Most children who receive the implants are between 1 and 5 years old, and CHOP is currently implanting some as young as 9 months.

Coupled with extensive speech and hearing therapy and support, the implants can help many children to develop speech, especially during the critical period when they are first learning language skills. For others who may also have multisensory or cognitive impairments, cochlear implants can provide a connection through sound that helps families nurture and care for their child.

In the past year, CHOP’s Cochlear Implant Program performed 81 cochlear implants, and it currently tracks more than 800 children.

In 2015, the program, along with the other outpatient hearing and language support programs at the Center for Childhood Communication, will move to a larger space within the Buerger Center, giving it more room to grow. A new observation room with a two-way mirror also will allow extended families to watch the child’s implant activation.

“There are these 'aha' moments and you can see it in his eyes, and you think, 'Oh my God, he heard that!'” Lexi says.

Both before and after the surgery, Phoenix and his family met with audiologists, speech-language pathologists, teachers of the deaf and social workers.

“CHOP just has this really amazing way of supporting the whole family,” Lexi says. “It’s a combination of warmth and professionalism.”

Now 11, Phoenix has thrived since receiving the implants, which he only takes off when he goes to sleep at night or when he goes swimming. After years of speech therapy, Phoenix no longer needs a speech-language pathologist.

In fact, he is responding so well to the implants that he landed the role of Templeton in this summer’s Town and Country Players production of “Charlotte’s Web.” Of course, it may also have had something to do with his personality.

Although there are times when Phoenix feels self-conscious about his implants — he changes the batteries on them when no one is looking — he is not letting anything hold him back. He loves sports, especially skateboarding, swimming and basketball.

“There are definitely a lot of challenges, but I’ve never had any challenges that were too hard,” he says.