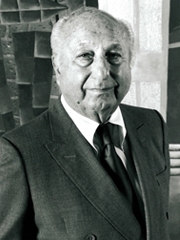 Raymond G. Perelman was born in Philadelphia, Pennsylvania. He grew up in the Feltonville and Olney sections of the city and later attended the University of Pennsylvania.

Perelman’s business career began when he started working with his father at American Paper Products Company, the family business. He remained with the company for 50 years, though he also began developing his own niche by buying properties, buildings and businesses in the Philadelphia area.

In 1960, Perelman purchased the Belmont Iron Works, the largest steel fabricator in the Northeast, which provided structural steel for the construction industry. After purchasing Belmont Iron Works, he began to acquire many distressed or non­competitive companies throughout the 70s and 80s, either turning them around or selling them off.

Perelman was also the CEO of RGP Holdings, which still holds a vast array of financial, manufacturing and mineral interests. He also served on many Boards of Directors for various companies and played a very active role with many civic organizations. In October 1997, he was elected Chairman of the Board for the Philadelphia Museum of Art. He was also on the Board of Directors for Penn Medicine, Temple University Hospital, the National Museum of American Jewish History, and the Albert Einstein Health Center. Additionally, he was the Trustee for four charitable foundations that gave away millions of dollars in charitable donations each year.

A remarkable life. An enduring legacy.

For more than three decades, Raymond G. Perelman was a leading supporter of pediatric healthcare research at Children’s Hospital of Philadelphia. Thanks to his generosity and advocacy, CHOP’s Raymond G. Perelman Campus has become the site of ambitious breakthroughs poised to transform the lives of children for generations to come. We are extremely grateful for his gracious spirit, enduring friendship and unwavering commitment to all children, especially those living in the city of Philadelphia.