Why They Serve: Michael A. Stolper 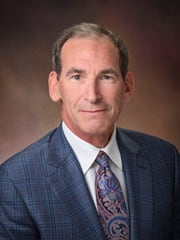 Michael Stolper is the Founding Partner of Veritable, LP, a financial and investment management firm headquartered in Newtown Square, PA. He and his wife, Jane, are members of the Chairman's Circle at Children's Hospital of Philadelphia (CHOP). He was recently named Chair of CHOP’s Foundation Board of Advisors and a member of CHOP’s Board of Trustees. He is a former Trustee of the National Audubon Society, and Audubon Pennsylvania.

“We started out like many grateful parents, but now we have come to see CHOP through a much broader lens that transcends our daughter’s medical needs or any geographic borders. We all aspire to lead lives that have meaning and which matter, and CHOP seems to be a big canvas for such things.”

Michael and Jane have been donors to Children's Hospital of Philadelphia since the late 1980s. They have become most involved with the Division of Gastroenterology, Hepatology and Nutrition, and in particular the work of Drs. Baldassano and Mattei. In 2014, they established the Jane and Michael Stolper Fellowship in Inflammatory Bowel Disease Research at CHOP. And in 2016, they established the Stolper Family Fund for Crohn’s Disease Research and Clinical Care. They are passionate ambassadors for CHOP in support of IBD research.