Watson, 2, has been a patient of CHOP’s Metabolic Disease Program since he was 13 days old. Recently, North Smyrna Elementary School — where his mom is a teacher — held a “Rock Your RARE” wacky dress day to support Watson and raise awareness of rare diseases. 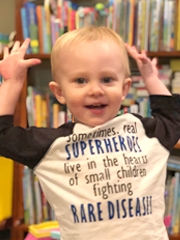 Jessica’s son Watson was born with a metabolic disorder called isovaleric acidemia, a rare disorder in which affected individuals have problems breaking down an amino acid called leucine from the food they eat. The disorder had been detected through his newborn screening. Watson began care at CHOP when he was 13 days old, through observation, additional testing and dietary changes. Watson’s daily needs include a low-protein diet, as well as medical formula and an amino acid supplement. “During illnesses or stressors, such as teething and immunizations, he requires closer attention and few medical changes to help support his body and avoid serious complications,” explains Jessica.

“He is now 2 1/2 years old and has remained asymptomatic due to the incredible and meticulous care provided by the angels at CHOP.” Watson is a handsome, sweet, bright, and energetic boy who brightens his family’s world.

Jessica is an early childhood teacher at North Smyrna Elementary School in Delaware. When Watson turned 2 in December, Jessica asked family and friends to make donations to CHOP in lieu of birthday gifts. This gave her an idea: Rare Disease Day is observed at the end of February. “So I came up with the idea to create a school-wide fundraiser.” She called it the “Rock Your RARE” day to spread awareness and celebrate uniqueness. She presented the idea to the school principal, who quickly approved it.

“I reached out to my co-workers for their help to involve their students in creating zebra-themed decorations to display in the hallways,” says Jessica. “They turned out perfect. In addition to the $1 donations made to wear a hat, I also sold bracelets and zebra bows to the faculty.” She asked a friend to make shirts for her and Watson and purchased numerous zebra-patterned pieces of attire.

“The morning of the event, I woke up with plenty of butterflies in my stomach,” she recalls. She put on zebra leggings, a tutu, bows, and zebra visor, as well as a shirt with the words “I love someone with isovaleric acidemia.” She dressed Watson in a “Superhero” shirt and headed to the school. “I was greeted at work by countless co-workers ‘rocking their rare,’ including my early childhood education family wearing matching zebra leggings.” The day contained plenty of tears of joy.

“I feel proud and grateful that our event was such a success,” Jessica says. “Not only because of what it meant to me personally, but to see the impact it had on others. Fellow co-workers and students showed their support through personalized shirts supporting friends and family members. I also enjoyed hearing the many stories that were shared with me throughout the day.”

The event surpassed their goal of $300, raising over $500. Jessica hopes to make it a yearly event that will continue to spread awareness, model acceptance, celebrate uniqueness, and raise necessary funds for continued research and care.

Consider planning a fundraising event of your own!