After sudden paralysis, Ashley, 13, is learning to walk again with the help of CHOP rehab therapists, positive thinking and a lot of hard work 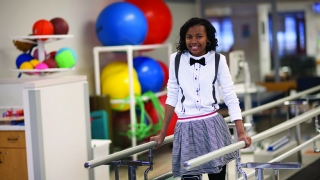 In October, 13-year-old Ashley Broaddus was in writing class at school when she felt pain in her lower back. In the nurse’s office, the pain increased and she suddenly lost feeling from the chest down. Ashley’s mother, Yvonne Farrell, arrived to find her crying and unable to move her legs.

“We called the ambulance. I stood there for a minute talking to her dad, wondering where to take her,” says Farrell. “I was thinking the closest hospital. And he said, ‘No, CHOP is the best.’ So we came to CHOP.”

There, they learned that Ashley had an arteriovenous malformation, a tangle of abnormally formed blood vessels, in her spine — which had ruptured. After surgery to stop the bleeding, some feeling gradually returned to Ashley’s legs.

Then the hard work began: daily physical therapy (PT) to master basic motor skills like standing and walking, and occupational therapy (OT) for activities like getting dressed and cooking.

“They taught me how to get up from bed in the morning, how to transfer from the bed to the chair, how to roll the wheelchair,” Ashley says. “And it was kind of hard, because you need a lot of upper-body strength.”

After a 10-week stay, she went home on Dec. 24, but she returns to CHOP twice a week for outpatient PT and OT.

When she arrives at the GIANT Food Stores Physical Therapy Gym in Children’s Seashore House for this afternoon’s PT session, she’s smiling and energetic — even after a full day of school. She has a wheelchair, but most of the time, she uses it as a coat rack. Even if movement is slow-going, she is determined to walk using a walker.

Therapists greet Ashley enthusiastically, complimenting her hair and outfit. She is a vibrant, expressive teenager, down to the colorful “Flower Power” design on her leg brace and the One Direction stickers adorning her walker.

Ashley and Jessica Engle, PT, DPT, chat like old friends while Ashley pedals a stationary bike to build strength in her weaker right leg; Engle nudges Ashley’s right foot up and over with each rotation. “One of these days you’re going to get it around by yourself,” Engle says.

As they move from exercise to exercise, Engle keeps up a steady stream of encouragement. “Push, push, push!” she urges, while Ashley does leg presses. “I like how straight you are. Can you feel the difference?” Ashley nods, smiling.

They abandon the walker and practice walking on crutches — the next phase of her recovery. As they walk around the gym, Engle plays music on her iPod. “We always have to have One Direction playing while we’re walking,” Engle says. “You’re doing a perfect job,” she tells Ashley. “Just remember: One crutch, leg. Other crutch, leg. It’s not a race.”

Ashley knows about races. Before all this, she ran the 100-meter dash on her school’s track team. She also won a ballroom dancing contest and hoped to become a cheerleader this year. She wanted to be a model or a lawyer when she grows up. Now she wants to be a physical therapist.

Ashley makes it to the end of a short hallway and back again on crutches, twice — the farthest she has walked on crutches so far. Engle says it’s important to keep pushing her with each session so that her muscles keep improving. She makes another breakthrough as she practices going up and down stairs. Engle gives her a high five: “Awesome, Ashley! You’re rocking this!”

Ashley wraps the PT session by standing up and sitting on a low bench, a task that used to require no thought or effort at all. She’s tired, but the smile has rarely left her face in the last hour.

“What’s so great about her is that she has such a positive attitude about everything. She’s been through so much, but I haven’t heard her complain one time,” Engle says.

At first doctors warned that Ashley might not walk again, but the family is optimistic. “They said Ashley is changing every day, so they really don’t know,” Farrell says. “But we are hopeful.”

All Ashley needs to keep going is the hope that she will walk and run and dance again. And like her favorite band, she’s focused on moving in only one direction: forward.