Two-year-old Kendall is thriving as a child with Down syndrome. He keeps up with his typically developing peers in most areas and serves as inspiration for new parents of children with trisomy 21. 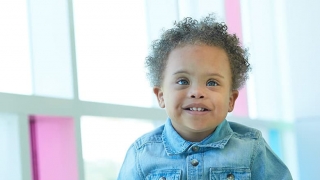 “Every time he comes to any type of therapy or we meet new people or are talking to new moms about having a child with Down syndrome, they always say they hope their child is on the same path as Kendall,” says his mother, Christine.

Christine wasn’t always so optimistic about Kendall's future. Although she has worked with clients who had Down syndrome, she and her husband, Kenneth, weren’t prepared when prenatal screening revealed their own child had the genetic disorder. For months, they struggled with denial, anger and depression before finally arriving at acceptance.

As it turned out, Kendall’s birth may have saved his mom’s life. While delivering Kendall by caesarean-section, doctors noticed a growth on one of Christine’s ovaries. They removed and biopsied it. Christine had ovarian cancer.

“The doctors said if it wasn’t for Kendall, I would have gone undiagnosed until it was too late,” Christine says.

Christine had a total hysterectomy and began chemotherapy two months after Kendall’s birth. By then, she had already connected online with other families who have a child with Down syndrome (also known as trisomy 21). This new community and the couple’s family and friends provided emotional, practical and financial support at a time when Christine’s illness and the demands of her new baby kept her out of work for 18 months. The couple also have two older daughters with developmental disabilities.

“I had the support of my family, friends, and my new trisomy 21 family. Everybody just pulled together to help us,” Christine says.

Kendall’s pediatrician referred the family to the Trisomy 21 Program at Children’s Hospital of Philadelphia (CHOP), 45 minutes away from their home in New Jersey. While Christine was going through her own treatment, the Trisomy 21 Program coordinated a host of services for Kendall, including physical and occupational therapy, speech therapy and feeding therapy.

Kendall has been relatively healthy so far. His only medical procedures included ear tubes to help with ear infections and surgery to remove his tonsils and adenoids because of sleep apnea. He is also being treated for asthma.

Kendall is a happy toddler who loves to follow his big sisters around the house. He loves music, especially the Baby Shark song and This Little Light of Mine. His speech is delayed, but in most cases, he can keep up with his typically developing friends. His daycare teachers and parents of his classmates have been enormously supportive.

“They have been brought into the Down syndrome community because of Kendall,” Christine says.

Kendall is now learning sign language (alongside his parents and teachers) so he can better communicate his needs. He already knows how to find and navigate his way through the sign language program on his mom’s phone.

Christine’s deepest wish for Kendall is that he remain healthy and happy. To help realize that dream, she and Kenneth will teach him to advocate for himself as an individual with Down syndrome and encourage him to go as far as he can in his education. They have less control over their other dream for his future: That he find acceptance. But, by teaching others about Down syndrome and participating in awareness events like the 2019 CHOP Buddy Walk®, they hope they are doing what they can to make their dream a reality for Kendall.

Christine is amazed by how much Kendall has accomplished so far in his young life — and by how far her beliefs have evolved since learning she was carrying a child with Down syndrome. At first, she and Kenneth were so conflicted that they didn’t tell their family and friends they were expecting until the month before Kendall was born.

“When I woke up from the c-section, I didn’t want to see him. I was scared,” Christine says. “My husband said, ‘He’s perfect. Everything’s going to be fine.’  Once I held my son, I knew everything was going to be OK.”