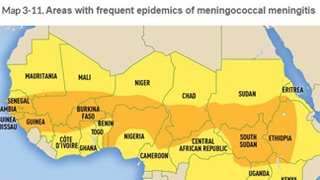 View Larger — Photo Courtesy of CDC The Meningitis Belt includes parts of countries in sub-Saharan Africa that have the most meningitis outbreaks. The Belt stretches across the continent, from Senegal in the west to Ethiopia in the east, encompassing parts of at least 26 different countries. The area has a combined at-risk population of about 430 million people. Outbreaks typically occur during the dry season (from December to June) and can last up to two or three years before being controlled. The epidemics can be large in scale, affecting up to 1 in every 100 people.

In 2010, a newly developed meningococcal A conjugate vaccine, known as “MenAfriVac,” was introduced to countries in the Meningitis Belt. Between 2010 and 2014, the vaccine was given to more than 220 million children in 15 countries. Its impact was seen immediately — in 2014 there were no new cases of meningitis A in the countries that vaccinated. Furthermore, epidemics in the Belt reached an all-time low. By 2020, the MenAfriVac vaccine is expected to protect almost the entire population at risk in the Meningitis Belt — preventing an estimated 1 million cases of meningitis A and 150,000 deaths.