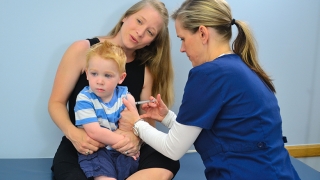 Collectively, each year we experience whatever the flu virus sends our way. Some years are worse than others. Last influenza season was considered moderate in the United States, but sadly, more than 100 children died.

Sometimes it’s easy to forget how severe influenza can be for individuals, families and communities. Forgetting the deadly potential of the flu virus coupled with the busy time of year and the myths that continue to circulate about the flu vaccine all coalesce to keep annual flu vaccination rates lower than we would hope.

But here are three reasons why it is important to make time to get all family members vaccinated:

More about HILLEMAN: A Perilous Quest to Save the World’s Children

This award-winning film tells the story of Dr. Maurice R. Hilleman, a vaccine scientist whose work is credited with saving eight million lives every year. The film is part of the Vaccine Makers Project, an outreach program sponsored by the Vaccine Education Center, which also includes free, standards-aligned curricula for education about the immune system, infectious diseases and vaccines.

As part of its outreach efforts, Families Fighting Flu (FFF) shares the personal stories of its member families whose lives have been forever altered by the loss or near loss of a loved one. In addition to these impactful stories, FFF offers a variety of resources for adults and children and is a contributing member of the Keep Flu out of School initiative.