Since its release, the human papillomavirus (HPV) vaccine has been embroiled in controversy. Many people with concerns question its safety; others question the need for it. Regardless, the end result is the same — young people who could be protected against some forms of cancer later in life are passing up the opportunity, either directly or as the result of a decision made by their parents.

From a public health perspective, this is like watching an unnecessary tragedy develop in slow motion. In the latest data from the U.S. Centers for Disease Control and Prevention (CDC), released in August 2019, about 2 of every 3 teens between 13 and 17 years of age had received at least one dose of HPV vaccine, but only about half of them had completed the recommended number of doses. In contrast, in late 2018, Australia celebrated being on track to eliminate HPV as a public health problem within the next two decades. In 2016, the latest data available, about 3 of every 4 boys and 4 of every 5 girls in Australia had completed the HPV vaccine series by the age of 15 years. Australia used the quadrivalent HPV vaccine (HPV-4, Gardasil®) and switched to the nine-valent HPV vaccine in 2018. 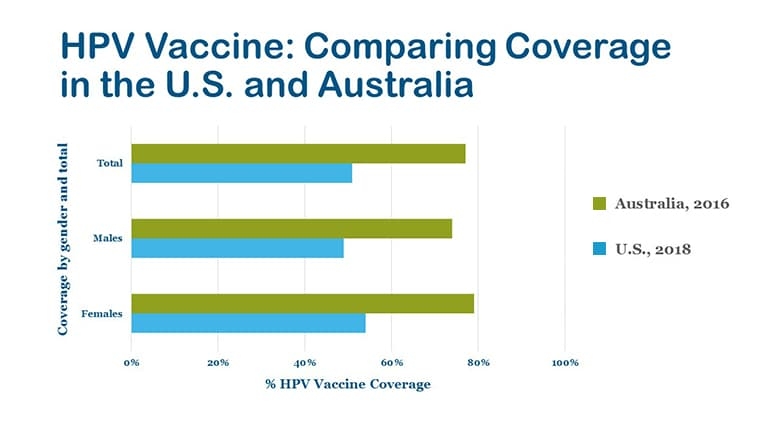 “But is the HPV vaccine safe?”

The HPV vaccine has been given to millions of people at this point. In the U.S. alone, more than 100 million doses of vaccine have been distributed. Even if people were getting the two or three recommended doses, which we know from the chart is not happening, that still amounts to more than 33 million people who have received the HPV vaccine. If the vaccine was causing any troubling side effects, they would have been discovered at this point.

Specific concerns related to the HPV vaccine as a cause of chronic disorders have been studied.

Summaries of many of those studies are provided on the page of our website devoted to sharing vaccine safety studies, vaccine.chop.edu/safety-references.

These studies found no link between receipt of the HPV vaccine and development of the following conditions:

The type of study they did was a “systematic review and meta-analysis.” When scientists conduct a study in this manner, they systematically locate as many papers as they can about a particular topic and use criteria to evaluate the quality of each before using statistical analyses to evaluate and summarize what all of the studies together indicate about the issue, in this case what is known about the relationship between HPV vaccine and autoimmune diseases.

What is a systematic review?

Typically, during the systematic review, many papers are eliminated because they do not meet certain predetermined criteria, such as:

What did these researchers learn about HPV vaccine safety?

Of the 541 papers located, 137 were considered close enough to the topic by virtue of their titles and abstracts that they were reviewed. Only 20 met all of the criteria for inclusion in the statistical part of the study. This may sound like a very small final number, but this shows how important it is to understand that just because a paper may seem like it is about a topic does not mean it is useful for answering a particular question. Also, of interest, of the 20 studies evaluated, five of them were determined to be of “low quality” based on their lack of scientific rigor.

In the current review, researchers determined that the HPV vaccine did not cause increases in any of the following types of autoimmune disorders:

“But my child doesn’t need the HPV vaccine”

As a parent, it is difficult to look at your 11- or 12-year-old and envision a time when they will become mature adults involved in relationships. But in the case of the HPV vaccine, the adage by Ben Franklin, “Don’t put off until tomorrow what you can do today,” applies for a few reasons:

The Vaccine Education Center regularly receives inquiries through a page on our website dedicated to answering questions about HPV, prevent-HPV.org. Some of the most frantic are those that come from individuals who themselves, their partners, or their children, recently had a positive HPV test. They are in complete and utter panic, often wondering what they should do, how they can get rid of it, and whether it is too late to be vaccinated. With a safe and effective vaccine, this scenario does not need to keep happening in homes throughout the country and the world.

For more information about HPV disease or vaccine, check out these resources: