A Look at Each Vaccine: Influenza Vaccine 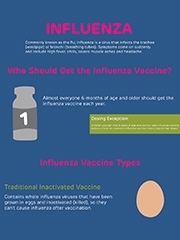 To view the full-size infographic, click this photo or the link in the text. Every year in the United States, influenza kills thousands to tens of thousands of people. Probably the best example of how devastating influenza can be was the influenza pandemic in 1918 — this worldwide outbreak killed between 50 and 100 million people in a single influenza season.

Click here to view a full-size image of the infographic [PDF, 115KB].

Commonly known as the flu, influenza is a virus that infects the trachea (windpipe) or bronchi (breathing tubes). Symptoms come on suddenly and include high fever, chills, severe muscle aches and headache. The onset of shaking chills is often so dramatic that many people will remember the exact hour that it started. The virus also causes runny nose and a cough that can last for weeks.

Complications of influenza include severe, and occasionally fatal, pneumonia.

Animals can be infected with influenza

Some diseases are only found in humans; however, influenza can infect many types of animals, specifically:

When animals are infected with different strains of influenza at the same time, a new type can emerge. If the new type can infect humans, be easily passed from one person to another and causes illness, a pandemic, or worldwide epidemic can occur.

What is the difference between an epidemic and a pandemic?

Influenza epidemics occur every year. An epidemic does not affect all people because many people have at least some immunity. On the other hand, when new strains emerge, people do not have immunity, and, therefore, almost everyone is susceptible.

Watch this video clip related to making a vaccine in advance of the arrival of influenza during the fall 1968 pandemic. The clip is from the award-winning documentary, Hilleman: A Perilous Quest to Save the World’s Children.

Who should get the influenza vaccine?

The Centers for Disease Control and Prevention (CDC) recommends that everyone 6 months of age and older receive the influenza vaccine each year.

Children 6 months to 8 years of age require two doses of influenza vaccine separated by four weeks if they:

How is the influenza vaccine made?

All of the vaccines listed below contain four influenza strains that circulated in the last year, either in the U.S. or in the Southern hemisphere.

A few different types of influenza vaccine are available:

Learn more about why the influenza vaccine changes with each season by watching this short video part of the series Talking About Vaccines with Dr. Paul Offit.

Does the influenza vaccine have side effects?

Side effects from the influenza vaccine are extremely rare. Fever or muscle aches generally occur in those who never had influenza or the influenza vaccine before. These symptoms do not mean that you have "the flu." Because the vaccine virus is "inactivated" in all but the nasal spray version, it cannot cause respiratory symptoms, such as congestion and cough, which are common with influenza infections.

The nasal spray version contains live weakened influenza viruses that can reproduce in the nose, but not the lungs. As such, it can cause mild symptoms, such as runny nose and low-grade fever.

Learn more about the concern that the influenza vaccine can cause influenza in this short video, part of the series Talking About Vaccines with Dr. Paul Offit.

What is the difference between winter viruses, colds and "the flu?"

With winter and the holidays comes cold and flu season. We see different people, more people, and tend to stay in warm, confined places. All of these things can lead to more sicknesses. Often when people become ill during the winter, they assume they have "the flu." While symptoms for some of these illnesses are "flu-like," the cause may not be influenza. Here is a list of common winter symptoms and the viruses that can cause them:

Gastrointestinal symptoms (vomiting, nausea, diarrhea) can be caused by:

Only three of the viruses mentioned above (influenza, rotavirus, and one version of coronavirus (SARS-CoV-2, which causes COVID-19)) are currently preventable by immunization. Washing your hands frequently and thoroughly, getting enough rest, staying home when ill, coughing into your elbow, and eating a well-balanced diet may decrease your chances of getting sick or passing an illness to others.

And remember, if you think you have "the flu," you may not actually have influenza.

Does the influenza vaccine cause Guillain-Barré syndrome?

The data have been mixed regarding whether influenza vaccine can cause Guillain-Barré syndrome (GBS); however, it is now generally agreed that very rarely, people can get GBS after receiving the influenza vaccine. However, people can also experience GBS after viral infections, including influenza, and the rates of GBS are about 17 times higher after infection than vaccination. For more information about GBS, see the September 2021 Parents PACK Feature Article, “Guillain-Barré Syndrome (GBS) & Vaccines: The Risks and Recommendations.”

Every year, between 75 and 150 previously healthy children die after becoming infected with influenza; therefore, the benefits of getting the influenza vaccine outweigh the risks.

When is the best time to get the influenza vaccine?

Influenza season can start as early as the fall, so the American Academy of Pediatrics (AAP) and the Centers for Disease Control and Prevention (CDC) recommend receiving the influenza vaccine in September or October. Because it takes about two weeks after receiving the vaccine to be fully protected, it’s important to get the vaccine early during the fall. Only a few groups of people should be offered the influenza vaccine in August if it is available. These include:

Some people are at increased risk of experiencing complications and as such, it is particularly important for them to get the influenza vaccine, including young children, pregnant women, adults 65 years of age and older, and individuals with underlying medical conditions, such as chronic heart, lung and kidney conditions.

Why do people still get the flu when they have had the influenza vaccine?

Influenza vaccine protects against the four influenza virus strains expected to circulate during influenza season. However, other factors should be considered.

First, some years the vaccine strains are not as good of a match with the circulating strains as we would like. In these cases, people who were vaccinated may still get influenza. For most of them, their disease will be less severe and shorter than if they had not been vaccinated.

Second, during the period when influenza is common, many other viruses are also circulating. Often these viruses cause colds and other illnesses that cause flu-like symptoms, such as congestion, runny nose, sneezing, coughing, sore throat, vomiting, nausea and diarrhea. Sometimes people with these symptoms will attribute them to influenza even though the virus is not to blame for the illness.

Third, because it takes about two weeks to be protected after getting vaccinated, some people may get the flu before the vaccine took effect.

Should I get the flu vaccine if I’m pregnant?

Yes. Pregnant women infected with influenza virus are more likely to suffer severe illness and complications that require hospitalization than women of the same age who are not pregnant. Physical changes including increased blood volume and added stress on the heart and lungs make influenza infections particularly dangerous during pregnancy. Pregnant women infected with influenza are also at increased risk of premature labor.

Do the benefits of the influenza vaccine outweigh the risks?