A Look at Each Vaccine: Meningococcal Vaccine 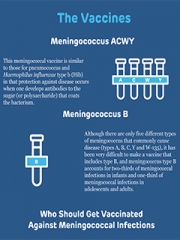 View larger image Meningococcus is one of the most rapid and overwhelming infectious diseases known to man. About 10 to 15 people in 100 with meningitis caused by meningococcus will die from the infection. When infected people get a bloodstream infection (i.e., sepsis), the number of deaths rises to about 4 in 10. Death from sepsis can occur within 12 hours of the beginning of the illness.

View a full-size image of the infographic [PDF, 223KB].

The bacterium, Neisseria meningitidis, primarily targets children younger than 1 year of age. Because meningococcus is contagious, outbreaks can occur in childcare centers and schools. Cases also occur in high schools and on college campuses.

Meningococcus usually causes meningitis (inflammation of the lining of the brain) or sepsis (an infection of the bloodstream). Symptoms of meningitis include stiff neck, headache, fever and drowsiness. Symptoms of sepsis caused by meningococcus include fever, shock and coma. The disease is so rapid that a child can be perfectly well and, in a matter of only a few hours, be in a coma. For these reasons, meningococcal infections that occur in childcare centers, elementary schools or high schools often cause panic in the community. Every year, about 350 people in the United States are infected with meningococcus and about 50 die. Meningococcus can also cause pneumonia and arthritis.

Find out more about meningitis in this video discussion between two CHOP doctors.

Consequences of meningococcal infection occur in about 20 of every 100 survivors and can include:

About 10 to 15 of every 100 people infected with meningococcus will die from the disease. Immunization is the most effective way to reduce the incidence of death and permanent sequelae caused by meningococcus.

How do you catch meningococcal infection?

Usually meningococcal infection is acquired after intimate contact with an infected person. Intimate contact includes kissing, sharing food or beverages, or staying in the same house or room (including a classroom) for more than four hours a day.

Because smoking disrupts the lining of the throat, people who smoke are at increased risk of some infections, including pneumococcus and meningococcus. Both of these vaccine-preventable diseases can cause meningitis.

How are the meningococcal vaccines made?

This meningococcal vaccine is similar to those for pneumococcus and Haemophilus influenzae type b (Hib) in that protection against disease occurs when one develops antibodies to the sugar (or polysaccharide) that coats the bacterium.

In order for young children to make an immune response, the polysaccharide must first be attached to a harmless protein. (see "How Are Vaccines Made?"). The polysaccharide attached to the protein is known as a conjugate vaccine. There are three conjugated meningococcal vaccines commonly used in the U.S. instead of the earlier vaccine:

In each of these vaccines, the polysaccharides from the surface of four of the five different types of meningococcal bacteria that cause disease were isolated individually and linked to a harmless protein. The four conjugated polysaccharides were then combined into a single shot, referred to by all four types – A, C, Y, and W-135.

Although there are only five different types of meningococcus that commonly cause disease (types A, B, C, Y and W-135), it has been very difficult to make a vaccine that includes type B, and meningococcus type B accounts for two-thirds of meningococcal infections in infants and one-third of meningococcal infections in adolescents and adults. Two vaccines to prevent meningococcus type B were licensed for use in adolescents in 2015 — Bexsero® and Trumenba®. Both of these vaccines were made using proteins, not polysaccharides, that reside on the surface of the bacteria. Trumenba contains two proteins, and Bexsero contains four.

Who should get the meningococcal vaccine?

The A, C, Y, W-135 meningococcal vaccine is recommended for:

The meningococcal B vaccine is recommended for:

Does the meningococcal vaccine have side effects?

The meningococcal vaccines may cause pain or tenderness where the shot is given, but do not cause any serious side effects. Although a possible association with Guillain-Barré Syndrome (GBS) was investigated, no causal association was found.

Is it true that more than one type of infection can cause meningitis?

Yes. Everyone has heard it on the news ─ the story of a local student infected with meningitis. Such a report inevitably results in many questions and a great amount of concern and even fear among families with children in the affected school.

There are some important considerations when this happens. First, it is important to remember that meningitis refers to an infection that has reached the lining of the brain and spinal cord. Second, it can be caused by viruses or bacteria (hence the reference to viral meningitis or bacterial meningitis).

Most, but not all, cases of bacterial meningitis can be prevented by vaccination. The bacteria most often associated with meningitis include meningococcus, pneumococcus, and Haemophilus influenzae type B (often referred to as Hib). Fortunately, by the age of 2, most children are fully immunized against pneumococcus and Hib, and most adolescents are protected against meningococcus.

Should college students get the meningococcal vaccine?

Although adolescents and young adults are less likely than infants to be infected, they are more likely to die from the infection; therefore, it is a good idea for all adolescents to be immunized.

Watch this short video to hear why college students should receive  meningococcal vaccine.

Learn more about outbreaks of meningitis on college campuses by watching this short video, part of the series Talking About Vaccines with Dr. Paul Offit.

One of the children in my child's school got bacterial meningitis. Should my child get the meningococcal vaccine, take antibiotics, or do neither?

First, try to find out what bacteria caused the meningitis. This usually takes about 48 hours from the time that the diagnosis was first made. Remember, bacteria such as pneumococcus and Haemophilus influenzae type b (Hib) can also cause meningitis. If the bacterium was meningococcus, find out from public health officials whether it really was an outbreak of meningococcus. If so, your child should receive the meningococcal vaccine that contains the type of meningococcus involved in the outbreak.

In addition, antibiotics (such as rifampin, ceftriaxone or ciprofloxacin) should be used for all children who have come in close contact with someone who was infected. Close contact is defined as sharing a classroom for more than four hours a day, kissing or sharing food or beverages. Close contact in the week prior to the outbreak of meningococcus puts one at greatest risk of infection.

Do the benefits of the meningococcal vaccine outweigh its risks?

Each year about 350 people in the United States are infected with meningococcus and about 50 die. Some survivors will suffer permanent disabilities such as seizures, loss of limbs, kidney disease, deafness, skin grafting or intellectual disability. The meningococcal vaccines do not cause any severe reactions. Therefore, the benefits of meningococcal vaccination outweigh the risks.