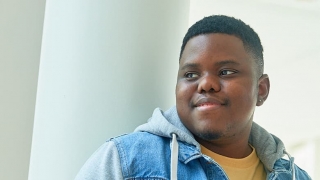 The Sickle Cell and Red Cell Disorders Curative Therapy Center (CuRED) at Children’s Hospital of Philadelphia (CHOP) offers many curative therapy options to our patients. Broadly, these treatments fall into two categories: blood or bone marrow transplant and experimental gene therapy. This information will help you learn about the differences between these two therapeutic options.

Why is a curative therapy needed?

In patients with sickle cell disease and beta-thalassemia, red blood cells do not correctly produce hemoglobin, the protein that moves oxygen around the body. Blood or bone marrow transplant and gene therapy are options for correcting this mutation.

Using a blood or bone marrow transplant (BMT), we replace the patient’s bone marrow with marrow from a donor that correctly produces hemoglobin.

First, we work with the patient to find a related or unrelated donor match. Next, the patient undergoes chemotherapy. This prepares the body to accept the new cells by “making space” in the bone marrow, and also suppresses the patient’s immune system to prevent rejection of the donor cells. Cells are then collected from the donor, either directly from the bone marrow through a surgical procedure or from the blood after mobilization of stem cells out of the bone marrow (called peripheral stem cell transplant). These cells are given to the patient like a blood transfusion.

After the transplant, the patient stays at CHOP for three to four weeks. The first 100 days after transplant are the most critical. During this time, we closely monitor the patient for complications such as graft-versus-host disease and infections. Within 14 to 21 days after transplant, the new stem cells should begin growing in the patient’s body and making new white blood cells, red blood cells and platelets. As this occurs, the risk of infection decreases.

All gene therapies for sickle cell disease and beta-thalassemia are currently in trials and are considered experimental. Patients with an available sibling match for a BMT are typically ineligible for gene therapy trials, as they would be a good candidate for a BMT.

For gene therapy, we first collect a patient’s own blood stem cells. For this to happen, patients are given injections of medicines that make the blood stem cells leave the bone marrow and enter the bloodstream. The stem cells are then collected by a process called apheresis, in which blood is drawn from the body, processed to pull out the blood stem cells, and the remainder is returned to the patient. A temporary central venous line is usually placed for the procedure.

Physician-scientists then modify the collected cells by inserting new genetic material or editing genes so that the cells can better produce hemoglobin. The patient then receives chemotherapy to clear out the existing bone marrow and “make space” for the modified cells. The modified cells are administered to the patient like a blood transfusion.

After the therapy, the patient stays at CHOP for about six weeks. The first 100 days after the procedure are the most critical. During this time, we closely monitor the patient for complications such as infections. There is no risk of graft-versus-host disease.

Within 14 to 28 days after the procedure, the new stem cells should begin growing in the patient’s body and start to produce new white blood cells, red blood cells and platelets. As this occurs, the risk of infection and bleeding decreases.

Patients need to return to the CuRED Clinic one to two times a week for one to two months and then monthly for the following year.

Gene therapies are still relatively new therapeutic options, and we do not yet know their long-term safety or durability. There is a risk that the patient’s body will stop correctly producing hemoglobin in the years following the procedure.

So, what are the differences?

For gene therapy, the patient must undergo one to four cycles of collection of stem cells in addition to the transplant, whereas for BMT, the donor (not the patient) undergoes the stem cell collection.

Following BMT, patients may need immunosuppressive drugs, whereas these medications are not needed with gene therapy because patients are receiving their own modified cells. The increased immune suppression after BMT may mean the risk of certain rare infections is higher with BMT than with gene therapy.

Due to the experimental nature of gene therapy, we require patients to be followed at CHOP longer after this procedure than with a BMT.

With both procedures, the chemotherapy currently used to clear space for the new stem cells carries a risk of many long-term complications, including infertility, hormone abnormalities, organ damage and secondary cancer.

Neither procedure impacts germ line cells. This means that the disease can still be passed on to biological children in the future.

The CuRED team will work with you to ensure you have all the information needed to make an informed decision. We know this is a difficult decision that may take time. Our nurse navigator is available to discuss care plans with families and to assist in coordinating follow-up visits.