Anatomy and Development of the Mouth and Teeth

Teeth begin developing in the fetus. Good nutrition from the mother during pregnancy is important in the development of the teeth. The mother's diet should have adequate amounts of calcium, phosphorus, vitamin C, and vitamin D. Certain medications, such as tetracycline, should not be taken by the mother while she is pregnant as these can cause discoloration to the developing teeth of the embryo. There are four main stages of development of the tooth:

Parts of the tooth

Each tooth has four main parts, including the following: 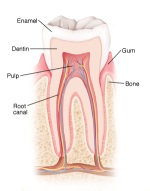 When will my child's teeth come in?

While every child is different, the primary teeth begin to come in between the ages of six and 12 months. Most of the primary teeth (baby teeth) will have erupted by 33 months. Girls tend to have their teeth come in before boys. The following are general guidelines for the eruption of the baby teeth:

The teeth on the upper jaw usually erupt one to two months after the same tooth on the lower jaw. There are a total of 20 primary teeth. Usually, about one tooth erupts per month once the teeth have started coming in. There is normally a space between all the baby teeth. This leaves room for the larger permanent teeth to erupt.

The eruption sequence can vary quite a bit from child to child. So, don't become overly concerned if your child's teeth do not follow the pattern above. However, if teeth fail to come in a year after the expected time, it would be advisable to check with your child's dentist to make sure they are developing properly. Below, we have provided average ages of eruption and shedding:

When will my child's permanent teeth come in?

Your child will begin losing his/her primary teeth (baby teeth) around the age of 6. The first teeth to be lost are usually the central incisors. This is then followed by the eruption of the first permanent molars. The last baby tooth is usually lost around the age of 12, and is the cuspid or second molar. There will be a total of 32 permanent, or adult, teeth.