How does the fetal circulatory system work?

During pregnancy, the fetal circulatory system works differently than after birth: 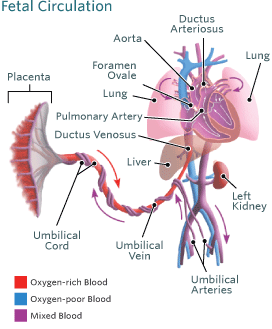 The fetal circulatory system uses three shunts, which are small passages that direct blood that needs to be oxygenated. The purpose of these shunts is to bypass certain body parts--in particular, the lungs and liver--that are not fully developed while the fetus is still in the womb. The shunts that bypass the lungs are called the foramen ovale, which moves blood from the right atrium of the heart to the left atrium, and the ductus arteriosus, which moves blood from the pulmonary artery to the aorta.

Oxygen and nutrients from the mother's blood are transferred across the placenta to the fetus. The enriched blood flows through the umbilical cord to the liver and splits into three branches. The blood then reaches the inferior vena cava, a major vein connected to the heart. Most of this blood is sent through the ductus venosus, also a shunt that passes highly oxygenated blood through the liver to the inferior vena cava and then to the right atrium of the heart. A small amount of this blood goes directly to the liver to give it the oxygen and nutrients it needs.

Waste products from the fetal blood are transferred back across the placenta to the mother's blood.

Inside the fetal heart:

At birth, the umbilical cord is clamped and the baby no longer receives oxygen and nutrients from the mother. With the first breaths of life, the lungs begin to expand. As the lungs expand, the alveoli in the lungs are cleared of fluid. An increase in the baby's blood pressure and a significant reduction in the pulmonary pressures reduces the need for the ductus arteriosus to shunt blood. These changes promote the closure of the shunt. These changes increase the pressure in the left atrium of the heart, which decrease the pressure in the right atrium. The shift in pressure stimulates the foramen ovale to close.

The closure of the ductus arteriosus and foramen ovale completes the transition of fetal circulation to newborn circulation.