What is foreign body aspiration? 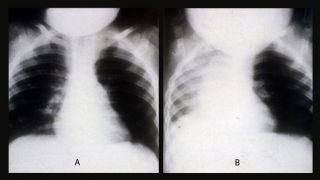 Left: Inspiratory view of chest X-ray showing normal expansion. Right: Expiratory view of hyperinflated left lung due to obstructive foreign body in left mainstem bronchus Foreign body aspiration is when an object is inhaled and becomes lodged in a child’s airway or lungs.

It's natural for children to explore their environment by seeing, touching and tasting objects around them. Unfortunately, their tendency to put non-food objects in their mouth can be dangerous or even life threatening.

Children can also choke on foods given to them too early in their development, before they have the molars and coordinated chewing motions to safely break those foods down.

The position of a child's larynx, or voice box, also makes small children susceptible to aspiration of foreign bodies into the airway. The most commonly aspirated foreign bodies in children include vegetable matter, nuts and round foods such as hot dogs and grapes.

Less common, but more difficult to manage foreign bodies include beads, pins and small plastic toys, among an infinite number of other small objects.

The diagnosis of an aspirated foreign body is based on a combination of the history of the child's illness, the child's presenting symptoms, and chest X-rays. If a foreign body in the airway is strongly suspected, a child needs to go to the operating room and have an airway examination performed under anesthesia. This examination is called a microlaryngoscopy and bronchoscopy (a look at the voice box and windpipe, or airway). 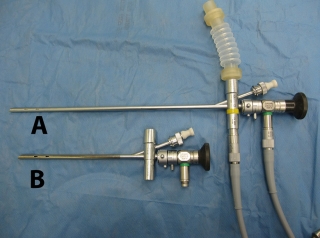 Various size bronchoscopes used to remove a foreign body A child may be diagnosed with foreign body in the airway when a family member has seen the child swallow food or a small object then noticed signs of airway distress, like coughing or difficulty breathing. Children with a persistent segmental pneumonia, especially right lower lobe, should also be considered for foreign body aspiration.

There are three primary ways to see if a child has inhaled something into the airway or lungs:

Bronchoscopy is the standard method for removal of an aspirated foreign body. An anesthesiologist puts the child into a deep sleep and then topical lidocaine spray is used to further anesthetize the child's larynx. An instrument called a laryngoscope is inserted into the airway to view the larynx; then a rigid, ventilating bronchoscope is passed beyond it, into the airway, and used to examine the trachea and right and left bronchi to locate the foreign body. 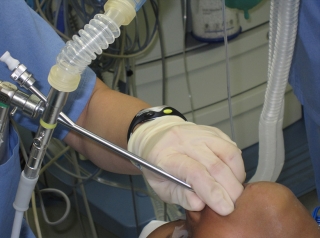 Removing a foreign body from the airway with a bronchoscope When the object is found, specially designed forceps are inserted into the airway through the bronchoscope to retrieve the object. This procedure requires training, delicacy and skill.

There are three kinds of forceps that may be used to remove airway foreign bodies:

Very rarely, the doctor may make a tracheotomy incision (an incision that opens the child's airway) to extract a foreign body that is difficult to remove due to its size or shape.

The child will typically stay in the hospital overnight after the procedure for observation. There may be airway swelling, increased secretions, infection or difficulty breathing after the foreign body is removed. Occasionally, if a foreign body has been left in a child for a long period of time, the child may require additional bronchoscopies to make sure that all of the foreign body has been removed and that there is no residual scarring or granulation tissue. Sometimes the child requires antibiotics, steroids or inhaled bronchodilators for a brief period of time after a foreign body is removed from the airway.

The Children's Hospital of Philadelphia runs an airway foreign body course for surgeons to perfect techniques for removing foreign bodies aspirated into airways.