What is generalized arterial calcification of infancy (GACI)?

Generalized arterial calcification of infancy (GACI) is a rare, genetic disease that affects the circulatory system in general, and the large and medium sized arteries in particular, throughout the body. The disease causes an abnormal buildup of calcium in the walls of the blood vessels, including those that carry blood from the heart to the rest of the body. Though sometimes diagnosed before birth, while a baby is in utero, GACI is more often diagnosed after birth.

GACI usually occurs during fetal development. Certain genetic defects cause the body to have low levels of pyrophosphate in the blood. Pyrophosphate is an enzyme that prevents the buildup of calcium deposits in blood vessels and arteries. Without enough of this substance, calcium begins to build up (called calcification), which narrows vessels and arteries and restricts blood flow.

This hardening of the arteries and vessels often causes newborns with GACI to show clinical signs of hypertension, heart disease, and kidney disease at birth. Infants with the disease are also at risk for stroke, heart attacks, and kidney failure early in life.

Signs and symptoms of GACI

Most babies are diagnosed with GACI after they are born. The initial indication of GACI is high blood pressure or kidney failure. Physicians may order X-rays for newborns with these conditions to look for calcification in arteries.

Heart failure may also develop in these infants and they may experience:

Other signs and symptoms may occur in older individuals and include:

Many of the symptoms of GACI are similar to another genetic disorder called pseudoxanthoma elasticum (PXE). It’s important that you work with your child’s healthcare team to determine an accurate diagnosis.

GACI is a genetic condition. There are two forms of GACI and they have many features in common in infants and young children. As children with these conditions grow up, though, the diseases produce different symptoms.

Both forms of GACI are autosomal recessive, which means that an affected baby has inherited two defective genes, one from each unaffected but carrier parent.

Testing and diagnosis of GACI

Nearly half of all babies with GACI are diagnosed early, generally soon after birth and in some cases before birth by fetal ultrasound. After birth, affected babies may show signs of heart failure, high blood pressure, respiratory distress, edema or fluid collections, or an enlarged heart.

In other babies, GACI is recognized later, within the first three to six months of life, with symptoms ranging from respiratory distress and cyanosis to heart failure and hypertension. In some babies, feeding problems, irritability and failure to thrive are the presenting features.

If a baby is born with heart failure, high blood pressure or kidney disease, standard X-rays, computerized axial tomography (CT scan), or MRI may be recommended to determine if there is calcification or stenosis (narrowing) in the arteries.

Today, fetal therapy is recognized as one of the most promising fields in pediatric medicine. Type 1 GACI can often be diagnosed in utero by fetal ultrasound during the third trimester, which may allow physicians to begin treating the condition before birth.

GACI is typically treated with medications that target cells involved in calcium buildup and mineralization.

Babies diagnosed with GACI have traditionally been treated after birth with  bisphosphonates, a  class of drugs normally used to treat osteoporosis. The goal of these medications is to reduce the calcium buildup.

Because most of the calcium buildup appears to occur during early development before the baby is born, doctors are looking at new treatment approaches that focus on early intervention. 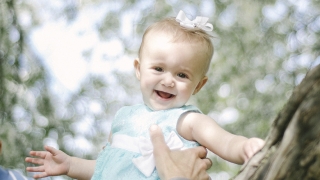 While still in the womb, Natalie's heart was already clogged with calcium. Her parents knew it didn't look good and turned to CHOP.

When GACI is diagnosed in utero by fetal ultrasound, prenatal treatment may be an option to minimize disease progression and improve the baby’s health at birth. At CHOP, physicians are pioneering a form of treatment that uses the osteoporosis drug etidronate. The drug is given to the mother during the third trimester to help keep calcium from building up in the arteries of the baby. Continued research is needed to determine if these new prenatal treatment methods can successfully minimize the damage caused before birth and improve outcomes for babies prenatally diagnosed with GACI.

Without care, children with GACI usually die by 6 months of age. Those who survive the first six months, which is considered the most critical period, may live into adolescence or early adulthood.

In a very small number of children, calcification of the arteries resolves on its own.

Children with GACI often have heart disease or kidney disease that requires long-term care. Depending on your child’s symptoms and conditions, she will be monitored and treated by specialists, including cardiologists or nephrologists. Based on the genetic diagnosis of type 1 or type 2 GACI, additional testing and monitoring will be necessary to monitor for development of rickets or PXE, respectively.

While still in the womb, Natalie's heart was already clogged with calcium. Her parents knew it didn't look good and turned to CHOP.