During prenatal development, the brain starts out as a tubular structure. As it grows, the inner tube remains and becomes a series of interconnected cavities known as ventricles. Within the ventricles, the choroids plexus produces cerebral spinal fluid (CSF) starting at the sixth week of gestation. By the neonatal period, approximately 300-500 cc of CSF is produced per day.

CSF flows through a series of openings or foramens in the brain and out into the subarachnoid space where it is reabsorbed by the venous system. If the CSF pathways are obstructed or obliterated by developmental or acquired abnormalities, CSF accumulates under pressure within the ventricular system. The ventricles begin to dilate, causing thinning and stretching of the cerebral mantle. This condition is called hydrocephalus.

The brain can accommodate ventricular dilatation to a certain extent without significant neuronal damage. As the process continues, however, irreversible brain damage inevitably occurs. 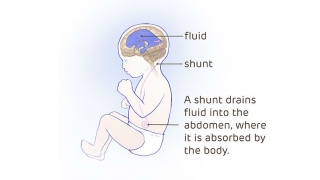 Ventricular shunting involves placement of a thin tube into the ventricles of the brain to drain fluid and relieve hydrocephalus. Hydrocephalus is one of the most common congenital anomalies affecting the nervous system, occurring with an incidence of 0.3 to 2.5 per 1,000 live births. Traditionally, hydrocephalus is detected and treated after birth with a shunting procedure. However, with the advent of high quality prenatal ultrasonography, ventricular enlargement is now routinely diagnosed in utero. This knowledge has facilitated obstetric care but presents a source of uncertainty for families and a challenge for the team counseling parents regarding a prognosis for the fetus.

It is important to distinguish hydrocephalus from ventricular enlargement or ventriculomegaly, which can also be caused by brain destruction and morphological maldevelopment. The diagnostic distinction can be difficult to make, particularly with ultrasound alone, but is critical because fetal ventriculomegaly from a destructive or maldevelopment process carries a poor prognosis. In these cases, such as hydrancephaly and holoprosencephaly, the ventricles are not only relatively enlarged but also often distorted due to overlying parenchymal abnormalities. Fetal ventriculomegaly is frequently associated with other severe developmental abnormalities, and this combination presents a uniformly dismal outcome.

True fetal hydrocephalus has a variety of causes. The most common form of isolated, obstructive hydrocephalus is so-called “aqueductal stenosis,” which is the blockage of CSF passage through the aqueduct of Sylvius. It accounts for up to 20 percent of cases of fetal hydrocephalus. Blockage at the aqueduct is assumed when the lateral and third ventricles are enlarged proximal to the obstruction, and the fourth ventricle is relatively small.

Fetal hydrocephalus is also commonly associated with congenital malformation syndromes. The Chiari II malformation accounts for approximately 30 percent of fetuses identified with ventriculomegaly. This malformation is characterized by myelomeningocele and posterior fossa abnormalities, which have distinct sonographic appearances (the so-called “lemon” and “banana” signs). Affected children will have a variable level of paralysis of the legs and perhaps brain stem malfunction as well.

The Dandy-Walker malformation accounts for two to 10 percent of children with hydrocephalus. It is defined by hypoplasia of the cerebellar vermis, cystic dilatation of fourth ventricle and hydrocephalus. In its most severe form, the syndrome is often associated with other CNS, cardiac, genitourinary, ocular and facial anomalies and is often accompanied by intellectual disabilities.

Hydrocephalus can have a genetic basis. Classic X-linked recessive hydrocephalus (Bickers-Adam syndrome) accounts for approximately 7 percent of male hydrocephalus. The condition is characterized by aqueductal stenosis, severe intellectual disabilities and in half of the affected children, an adduction thumb deformity. Hydrocephalus may also be present in a number of major and minor chromosomal aberrations affecting chromosome 8, 9, 13, 15, 18 or 21.

Traditionally, fetal hydrocephalus has been detected prenatally using sonographic measurements of the enlarged ventricles. The most useful measurement is the transverse atrial width, which is normally between 4-8 mm with a normal upper limit of 10 mm. The utility of the measurement is based on the fact that the atria are easily identified, and the measurement is nearly constant between 15 to 35 weeks of gestation. The finding of fetal ventriculomegaly requires a prompt, thorough evaluation that begins with a concerted effort to rule out additional anomalies. For patients diagnosed with hydrocephalus before the legal limit of abortion, there is an urgency to complete the work-up to allow for informed parental decision-making. 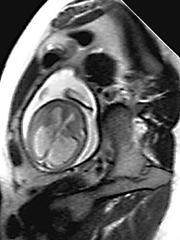 20-week fetal ultrafast MRI showing marked lateral ventricular dilation. © CHOP/CFDT The family history is reviewed for X-linked hydrocephalus and neural tube malformations. A complete ultrasound examination is carried out to search for additional abnormalities. But ultrasound evaluations alone can miss important anomalies, which will affect the outcome. Ultrafast fetal MRI is a more anatomically precise modality for prenatal neuroimaging. There is no apparent risk to the mother or fetus from the radiofrequency pulses or the magnetic field. Therefore, an MRI scan is obtained and interpreted by an experienced pediatric neuroradiologist to rule out any additional CNS anomalies. Amniocentesis is performed for viral cultures, chromosomal analysis and alpha-fetoprotein levels.

Hydrocephalus treatments depend on the type of fetal hydrocephalus. A thorough understanding of the natural history of fetal hydrocephalus should form the basis for rational treatment and parental counseling. Unfortunately, understanding of the natural history is presently insufficient to definitively provide an exact prognosis or offer fetal therapy. It is clear that fetal ventriculomegaly with associated abnormalities have a poor outcome. In cases of ventriculomegaly associated with infections, chromosomal abnormalities, and severe CNS and extracranial abnormalities, a poor prognosis may lead a family to end the pregnancy.

The outcome of isolated fetal hydrocephalus, however, is variable. It is related to etiology or cause and in all cases, outcomes appear to be less favorable when compared to neonatal counterparts:

These differences in outcome are most likely related to the period of untreated in utero hydrocephalus, forming the rationale for early intervention. Prenatal factors such as progression, degree of cortical mantle thinning to less than 1.5 cm and in utero duration of greater than four weeks are associated with a poor prognosis. On the other hand, those with mild isolated ventriculomegaly of less than 12 mm have an excellent prognosis.

Therefore, hydrocephalus treatments depend on the type of fetal hydrocephalus, rate of progression, gestational age and, ultimately, the family's wishes. Isolated hydrocephalus without associated malformations, detected before the legal abortion limit, may be reason enough to terminate the pregnancy for families who cannot accept the prospect of having a handicapped child.

Otherwise, the fetus is followed with serial ultrasounds. If the ventriculomegaly is stable, the fetus is carried to term. This does not deny the possibility of ongoing, irreversible damage in stable hydrocephalus, but recognizes that at present, there is no data to mandate preterm intervention. A cesarean section is performed at the discretion of the obstetrician when head size precludes vaginal delivery.

A small group of fetuses will undergo rapidly progressive ventricular enlargement. While this does not necessarily foretell a devastating outcome, it does appear to be a significant adverse predictor and consideration should be given for early delivery and early shunting.

Morbidity and mortality data related to prematurity argue against delivery and shunting before 32 weeks. Beyond this point, there continues to be a small risk of complications from early delivery including cerebral palsy, intraventricular hemorrhage, necrotizing enterocolitis and respiratory distress syndrome. These risks diminish as gestation progresses to term.

Fetuses who develop progressive ventricular enlargement and cortical thinning from hydrocephalus before 28 weeks may have irreversible damage by 32 weeks. Fetal shunting may be considered as part of the hydrocephalus treatments, but only in the context of a clinical trial and in a center with extensive experience in fetal surgery.