Hypomyelination with Atrophy of the Basal Ganglia and Cerebellum (H-ABC)

H-ABC is a type of leukodystrophy, a group of conditions that affect the white matter of the brain. These diseases damage the myelin sheath, which surrounds and protects the nerve cells in the brain and spinal cord and speeds transmission of messages between cells.

The process of the body forming this protective myelin sheath is called myelination. Typically, myelination develops in the first few years of life. In H-ABC, there is hypomyelination. Hypomyelination means that the body is unable to produce myelin at normal levels. This prevents the body from completing normal myelination of the brain, and in some cases, the nerves outside the brain.

The condition also reduces the size and function of the basal ganglia and the cerebellum. As a result, people with H-ABC often have motor problems, including stiffness of the muscles and joints, low muscle tone, difficulty with controlling movements, and problems with balance and coordination.

H-ABC is caused by a mutation in the TUBB4A gene.

In most genetic disorders like H-ABC, a gene mutation is inherited from your parents. H-ABC, however, is usually not inherited from a parent. Instead, the change in the TUBB4A gene is typically a random mutation in the person who develops the condition. In these cases, neither parent is a carrier, and the chances of having another child with the disease is extremely low. There is a small chance that one parent may carry the mutation in some cells (mosaicism), which means that they would not have symptoms but still be able to transmit the disorder to other children.

The symptoms and the progress of H-ABC differ depending on when the disease first appears.

When symptoms begin in the first few months of life, the effect of the disease tends to be severe and its progress more rapid. In these cases, symptoms may include:

When symptoms begin later, in early childhood, the effect of the disease tends to be milder and its progress slower. In these cases, the primary symptom is progressively greater trouble with movement, including:

In some cases, the symptoms can be very mild and begin in later in childhood or adolescence, or even in adulthood.

Testing and diagnosis for H-ABC

Diagnosis of H-ABC is made based on the physical symptoms, imaging of the brain and the results of genetic tests.

There is no known cure for H-ABC, but treatment is available to manage symptoms and improve the quality of life for individuals affected by the disease. 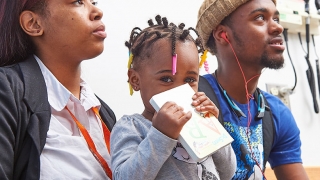 Find information about scheduling appointments with CHOP’s Leukodystrophy Center and what to expect during your first visit.

At Children’s Hospital of Philadelphia, your child’s care will be coordinated by our Leukodystrophy Center. Our multidisciplinary team provides advanced diagnostic testing, comprehensive clinical care, and the latest treatments available while we continue to seek new therapeutic options.

Clinical trials may also be an option. Your doctor can help you learn more about these studies. You can also find a list of ongoing studies at www.clinicaltrials.gov.

Children with H-ABC need regular monitoring by neurologists, as well as ongoing therapy and coordinated care by other medical subspecialists as needed to adapt treatment to their changing needs. Your child’s care is geared towards providing the highest possible quality of life and addressing any symptoms that cause discomfort.

Preparing for Your Leukodystrophy Center Appointment

Find information about scheduling appointments with CHOP’s Leukodystrophy Center and what to expect during your first visit. 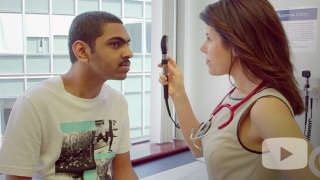 Hear from clinicians and families about how the Leukodystrophy Center is helping advance care for children with these disorders.

You can help children and adolescents living with H-ABC by supporting research that leads to clinical trials, new treatments and potential cures.