What are lymphatic malformations? 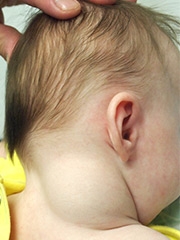 Lymphatics are similar to veins, except they carry water (lymph) instead of blood. They are also part of the immune system. Lymphatic malformations affect only the lymph vessels, and result in water-filled cysts that range in size from microscopic to macrocysts the size of small water balloons.

Veins and lymphatics travel together, and often blood leaks into the dilated lymphatics. This can result in blood blisters and bloody crusts (angiokeratomas) on the surface of the skin which connect to deeper lymphatics below. When the skin blisters and crusts rupture, leakage of bloody lymph may give the appearance of significant bleeding. The drainage is mostly bloody water that doesn’t clot like normal blood, which can be a nuisance for parents and patients.

Lymphatic malformations can also put patients at higher risk for infections. Infections (such as cellulitis) require antibiotic therapy. If oral antibiotics are not sufficient, patients must be admitted to the hospital for intravenous antibiotics.

Lymphatic malformations of the neck region were historically called cystic hygromas. They often contain a combination of micro and macrocysts. When present in newborns, these malformations can cause significant airway problems.

Lymphatic malformations of the lower extremities may be apparent at birth or may not appear until later in life as gravity begins to take effect and water accumulates in the tissues. Puberty may also play a role in the onset of edema. Various names have been given to these lymphatic malformations of the lower extremities, including lymphedema praecox, Meige’s syndrome and Milroy’s disease. A dominant hereditary component may be present due to mutations in genes that control blood vessel growth factors.

Because lymphatic cysts may drain and shrink spontaneously, conservative observation is a reasonable treatment option when the airway is not involved, but it is not predictable.

Lymphatic malformations comprised of mostly microcysts don’t respond as well to sclerotherapy, and sometimes surgical debulking is useful to decrease the soft tissue fullness. However, lymphatic malformations are associated with repeated bouts of inflammation, which can make dissection difficult. Injury to facial nerves during surgical resection is also a significant concern. Careful nerve monitoring and the use of nerve stimulators to identify important nerves during the operation are used to decrease this risk.

The carbon dioxide laser and a KTP laser are sometimes useful for superficial skin lymphatic cysts and angiokeratomas. The treatments are not curative, but they may result in significant improvement, especially for problematic areas that tend to bleed.

For lymphatic malformations of the lower extremities, surgical treatment tends to be suboptimal, and a lifetime of compression stockings and compression pumps may provide the best long-term results.

Lymph node transfers, which are effective for acquired lymphedema after lymph node dissections for cancer surgery, are not expected to be useful in hereditary lymphedema and congenital lymphatic malformations because of the lack of normal lymphatics.