The Respiratory System in Babies 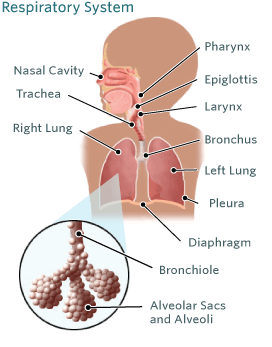 Respiration is the act of breathing in and out. When you inhale, you take in oxygen. When you exhale, you give off carbon dioxide.

What makes up the respiratory system?

The respiratory system is made up of the organs involved in the interchanges of gases and consists of the:

The upper respiratory tract includes the:

The lower respiratory tract includes the:

What is the function of the lungs?

The lungs take in oxygen, which the body's cells need to live and carry out their normal functions. They also get rid of carbon dioxide, a waste product of the cells.

The lungs are a pair of cone-shaped organs made up of spongy, pinkish-gray tissue. They take up most of the space in the chest, or the thorax (the part of the body between the base of the neck and diaphragm). They are enveloped in a membrane called the pleura.

The lungs are separated from each other by the mediastinum, an area that contains the following:

The right lung has 3 lobes. The left lung has 2 lobes. When you breathe, the air:

An important part of lung development in babies is the production of surfactant. This is a substance made by the cells in the small airways and consists of phospholipids and protein. By about 35 weeks' gestation, most babies have developed enough surfactant. Surfactant is normally released into the lung tissues where it helps lower surface tension in the airways. This helps keep the lung alveoli (air sacs) open. Premature babies may not have enough surfactant in their lungs and may have difficulty breathing.