What are subglottic hemangiomas?

Subglottic hemangiomas may form a large mass in the airway below the vocal cords, causing varying degrees of airway obstruction. They grow rapidly for at least 12 to 18 months followed by slow shrinking. Some hemangiomas require medical intervention because of their life-threatening nature in the airway.

Hemangiomas are the most common vascular malformation in infants and children. The malformation is composed of capillaries and other small vessels. They may occur anywhere on the body and most appear as solitary skin lesions without involvement if the airway.

Subglottic hemangiomas may form a large mass in the subglottic airway causing varying degrees of airway obstruction. They grow rapidly for at least 12 to 18 months followed by slow shrinking (called involution). However, not every subglottic hemangioma will shrink completely. Many require active intervention because of their life-threatening nature in the airway. 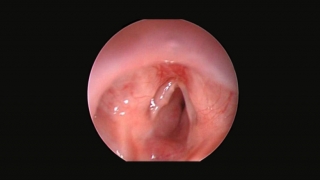 Endoscopic view of bilateral subglottic hemangiomas. To diagnosis a subglottic hemangioma, the child will first have a plain neck X-ray. The X-ray alone may show a mass in his airway. Flexible laryngoscopy in the office may also be enough to reveal that a hemangioma is causing the respiratory symptoms.

To confirm the diagnosis, the doctor will perform an endoscopy with microlaryngoscopy and bronchoscopy. This will help to determine the extent of the airway hemangioma and make sure that it has no extension into the tracheal airway. Once the airway is established, an MRI of the neck and brain is useful to ensure that the hemangioma has not extended into the neck or skull.

Propanolol shows promise in rapid reduction of airway symptoms for children with subglottic hemangiomas. All patients must undergo a cardiac evaluation before beginning this therapy. Propanolol is a beta blocker that causes capillary vasoconstriction, decreased expression of vascular endothelial growth factors, and apoptosis (death) of capillary endothelial cells. This causes the hemangioma to shrink.

The most common side effect of propanolol is drowsiness and hypoglycemia. For this reason, the child is observed in the hospital when he starts taking the drug and for start of treatment and the dosage is gradually increased to therapeutic levels over several days. This treatment may be supplemented with steroids. Most patients will respond within one to two weeks, but some may not respond at all and require other treatments. At CHOP, these children are always followed closely by the vascular malformation team.

Watch as a surgeon removes a subglottic hemangioma, and see the airway before and after treatment.

The outcome for treatment with endoscopic, open surgery or propanolol is outstanding and most patients go on to live normal lives.