What is an upper respiratory infection (URI)?

An upper respiratory infection (URI), also known as the common cold, is one of the most common illnesses, leading to more primary care provider visits and absences from school and work than any other illness every year. It is estimated that during a one-year period, people in the U.S. will suffer one billion colds. Caused by a virus that inflames the membranes in the lining of the nose and throat, colds can be the result of more than 200 different viruses. However, among all of the cold viruses, the rhinoviruses cause the majority of colds.

Facts about an URI or cold:

When is "cold season?"

Although upper respiratory infections can occur at any time of year, children are most likely to have colds during fall and winter, starting in late August or early September until March or April. The increased incidence of colds during the "cold season" may be attributed to the fact that more children are indoors and close to each other. In addition, many cold viruses thrive in low humidity, making the nasal passages drier and more vulnerable to infection.

What causes the common cold?

There are many different types of viruses that cause the common cold. In fact, over 200 different varieties of viruses can cause the symptoms of a cold. The most common virus is called the rhinovirus. Other viruses include the coronavirus, parainfluenza virus, adenovirus, enterovirus, and respiratory syncytial virus (RSV).

After the virus enters your child's body, it causes a reaction — the body's immune system begins to react to the foreign virus. This, in turn, causes:

How did my child catch a cold?

In order to catch a cold your child must come in contact with someone who is infected. The cold virus can be transmitted in the following ways:

What are the symptoms of a common cold? 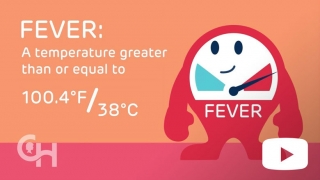 Watch this video to learn why children get fevers and when to call the doctor.

The symptoms of a cold start from one to three days after your child has been in contact with the cold virus. Usually, the symptoms last about one week, but this varies in each child, and may last even up to two weeks. The following are the most common symptoms of a cold. However, each child may experience symptoms differently. Symptoms may include:

Signs and symptoms of a cold in infants:

Signs and symptoms of a cold in older children:

The symptoms of the common cold may resemble other conditions or medical problems. Always consult your child's primary care provider for a diagnosis.

How is a cold different from the flu?

A cold and the flu (influenza) are two different illnesses. A cold is relatively harmless and usually clears up by itself after a period of time, although sometimes it may lead to a secondary infection, such as an ear infection. The flu can also be harmless, but may progress to a more complicated illness, such as pneumonia and even death. What may seem like a cold, could, in fact, be the flu. Be aware of these differences (source: CDC):

Who is at greater risk for catching the common cold?

Children suffer more colds each year than adults, due to their immature immune systems and to the close physical contact with other children at school or day care. In fact, the average child will have six to eight colds a year, while the average adult will get two to four colds a year. However, the average number of colds for children and adults will vary.

How is the common cold diagnosed?

Most common colds are diagnosed based on reported symptoms. However, cold symptoms may be similar to certain bacterial infections, allergies, and other medical conditions. Always consult your child's primary care provider for a diagnosis.

Treatment for the common cold

It is important to remember that there is no cure for the common cold and that antibiotics will not help treat a common cold. Medications are used to help relieve the symptoms, but will not make the cold go away any faster. Therefore, treatment is based on helping the symptoms and supportive care.

Treatment may include the following:

To help relieve the congestion and obstruction in the nose for younger children, consider the following:

Do not give aspirin to a child who has fever. Aspirin, when given as treatment for viral illnesses in children, has been associated with Reye syndrome, a potentially serious or deadly disorder in children. Therefore, pediatricians and other health care providers recommend that aspirin (or any medication that contains aspirin) not be used to treat any viral illnesses (such as colds, the flu, and chickenpox) in children.

There are other medications for congestion, cough, or runny noses. In 2008, the FDA recommended a ban on over-the-counter cough and cold medicines for children younger than four years old.

Discuss your options with your child's primary care provider.

Can I prevent my child from getting colds?

What are the possible complications from having a cold?

The following are some of the complications that might occur if your child gets a cold:

Contrary to popular belief, cold weather or getting chilled does not cause a cold, according to the National Institute of Allergy and Infectious Diseases. However, more colds do occur during the cold season (early fall to late winter), which is probably due to a variety of factors, including the following:

Antibiotic overuse in children has become a common problem, aggravated by parental pressure for the medication, according to the American Academy of Pediatrics (AAP). As a result, many bacterial infections in the U.S. and worldwide are becoming resistant to antibiotics, thus creating a lack of effective treatment for bacterial infections.

Overuse of antibiotics is leading to strains of diseases that are becoming resistant to the medication, making it harder to treat patients. All too often, antibiotics have been prescribed for conditions such as colds, fluid in the middle ear, or bronchitis, which do not respond to antibiotics, according to the CDC. Antibiotics are only effective in treating bacterial infections.