P.J., a 10-year-old girl who came to the Cancer Center for a second opinion, P.J. presented with a tumor measuring 3.7 x 3.5 x 7.7 cm in her right mandible. A biopsy of the tumor that had been performed at another hospital revealed that it had histologic characteristics of both Ewing sarcoma and osteosarcoma, making initial diagnosis challenging. The team at CHOP, after performing another biopsy, classified the tumor as Ewing sarcoma.

The disease had metastasized to P.J.’s bone marrow. In early 2010, P.J. had six cycles of five-drug chemotherapy. Because local control is an important component of treatment for this disease, the Cancer Center team consulted with David C. Stanton, D.M.D., M.D., F.A.C.S., an oral and maxillofacial surgeon in CHOP’s Division of Dentistry. Stanton determined that given the tumor’s size and location, complete resection would be difficult. He recommended radiation therapy instead.

“If she had positive margins after the resection, she would have had to get radiation anyway,” says Rochelle Bagatell, M.D. , chief of the solid tumor section at the Cancer Center and P.J.’s oncologist. “And the surgery was expected to be quite disfiguring.” 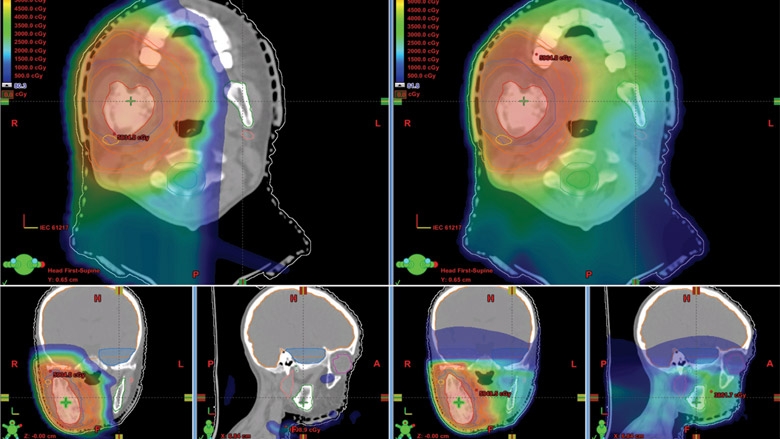 Radiation oncologist and medical director of the Roberts Proton Therapy Center Zelig Tochner, M.D., evaluated P.J.’s case and was quick to recommend proton therapy. Two key factors made P.J. an excellent candidate for this extremely precise form of radiation: her age (younger patients, because they are still growing, are more susceptible to radiation’s harmful effects) and the location of her tumor. “With conventional radiation, she would have a lot of issues down the road with lack of salivary function,” says Bagatell. “What proton therapy enabled us to do was to limit the toxicity to the mouth, salivary glands and bony structures.”; P.J. received 31 proton treatments at the Roberts Center, and eight additional cycles of chemotherapy. Throughout her treatment, she had round-the-clock access to CHOP’s renowned subspecialists in dentistry, speech therapy, gastroenterology and other fields, who provided critical support when she experienced difficulty eating and opening her mouth —complications that are common among patients who receive radiation to the jaw.

Bagatell believes these complications may have been worse with conventional radiation, and that P.J. will be spared many of the late effects she would likely have experienced with conventional radiation — including problems with chewing, swallowing and bone growth— because proton therapy was used to target radiation directly at her tumor while minimizing damage to nearby healthy tissue. This therapy appears to have left the other side of her mouth and jaw virtually unaffected.

“If she had gotten conventional radiation therapy, she probably would have had significant issues on both sides,” says Bagatell. “Proton therapy allowed us to focus on the area that needed to be focused on and avoid toxicity to other areas.”