Al Jalila Children’s, UAE’s only children’s hospital, has entered into a Memorandum of Understanding (MOU) with Children's Hospital of Philadelphia (CHOP) — renowned as one of the best healthcare facilities in the world for children — to collaborate on a dedicated neurology outreach program. 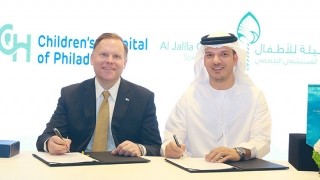 A core tenet of the alliance is the use of telemedicine consultation that can reduce the physical and financial burden of care for patients and their families. This is especially beneficial for patients with uncertain initial diagnoses. The new collaboration is intended to explore the use of telemedicine to assist complex patients during their care at Al Jalila Children’s for medication adjustments, vagal nerve stimulation, or intracerebral device programming.

Additionally, the alliance is designed to create an environment that will enable patients from the region that were being cared for neurology-related disorders elsewhere to continue their treatment plans at Al Jalila Children’s, which could be in consultation with CHOP physicians and lessen the burden on families of patients to travel to and from the USA.

The Division of Neurology at CHOP is a global leader in pediatric neurologic disorders, with one of the largest and most comprehensive programs in the world. “CHOP is committed to improving health for children worldwide, and we are excited to collaborate with Al Jalila Children’s in this important effort,” said Bayley.

“The collaboration with CHOP is one of our many endeavors in expanding the potential of pediatric healthcare in this region. By combining technology and medical expertise, telemedicine enables us to deliver better treatment results and hope to the thousands of patients suffering from epilepsy and neurology disorders. As the only children’s hospital in the UAE, our vision remains to make pediatric healthcare of international standards accessible to all children in this region,” said Dr. Alawadhi.

Al Jalila Children’s is the first dedicated children’s hospital in the United Arab Emirates. The state of the art medical facility was created under the directives of His Highness Sheikh Mohammed Bin Rashid Al Maktoum, Vice President and Prime Minister of the UAE, and Ruler of Dubai, to affirm his belief that all children should have an equal opportunity for success in life, and the treatment of children suffering from illness or disease should not be subject to geographical chance. The vision of His Highness is to have Al Jalila Children’s as one among the top ten paediatric hospitals in the world. Inaugurated on November 1, 2016, Al Jalila Children’s is an ultramodern hospital that aims to be the driving force behind the tertiary and quaternary care facility in the region. Al Jalila Children’s has 200 beds in a child and family friendly environment.