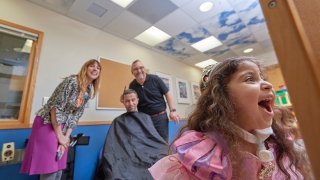 Richard Cornish walks the halls of the Hospital with the power to make children — no matter how sick — feel better. In his black bag he carries not a stethoscope or syringe, but a blow-dryer, brushes, scissors, gels and brightly colored hair chalk.

On a recent Tuesday, the first visit is to Isaiah, 12, on the eighth floor. Isaiah’s mom, Monica, is in the room preparing to take him home after a 41-day stay. Cornish hugs Monica. He drapes a cape around Isaiah and begins to buzz his hair, cutting neat lines at sideburns and neck, talking to Isaiah about how nice he looks. Monica tidies and packs. “Thriller” plays on a portable speaker. Hair accumulates on the floor. Isaiah isn’t able to speak, but his mom knows he’s happy: Michael Jackson and the buzz of the clippers are two of his favorite sounds.

When Isaiah was born, with a rare disease that causes calcification of the arteries, he was expected to live 24 hours. For Monica, the haircut exemplified Children’s Hospital of Philadelphia’s commitment to her son as a person, not just a patient. “Isaiah felt like a million bucks,” she said. “He got his hair shampooed and cut before he came home. Such a blessing.”

Cornish, a longtime stylist at a city salon, works at CHOP two-and-a-half days a week. He started as a volunteer and became an employee as the Salon Services Program was officially formed.

He and Amy Moore, a volunteer program lead in CHOP’s Wawa Volunteer Services Department, are called to rooms by nurses and child life specialists. They visit the oncology unit to give patients losing their hair special buzz cuts, accompanied by music and families. “When I’m in the room with them, it is never sad,” Cornish says. “It is almost magical. It is something that is met with power, and not something that is met with fear or regret.” They visit the rehab unit, where a fresh cut can lift up a teenager adjusting to a new reality. They consult with transgender youth to help them create looks to build confidence.

Twice a month, on the oncology unit, they provide cuts, color and blow-outs to parents and caregivers who — with sick children their priority — continually put their own needs aside. They hope to be able to offer pop-up salons for parents and caregivers throughout the Hospital. To help expand to reach even more patients and families, the program will rely on donors.

A Patient, A Princess

Thirty minutes after they leave Isaiah, Cornish and Moore are one floor down. The music has taken a turn for the Disney. Wadeem, 5, perches in a wooden chair, peering at a mirror. She wears a princess dress and low heels for the occasion. Before Cornish can brush her wavy brown hair, he must remove her crown. It takes a team — Moore, Cornish, and Wadeem’s mom, who hasn’t stopped smiling — but after about 30 minutes, Wadeem’s hair is nicely trimmed. Cornish takes the look over the top with a few streaks of purple and pink chalk and the repositioning of the crown.

Then he takes out his clippers and cape and begins to clean up Wadeem’s dad’s short cut. To anthems from Frozen and Moana, Wadeem spins and chatters, returning often to the mirror. Her mom continues to beam. Wadeem had a heart transplant last year. She is waiting now for diaphragm surgery. The family hasn’t been home to Saudi Arabia in two years. All of that goes away as Cornish works. “This child is beautiful,” he says to Wadeem’s dad, over the buzz of the clippers. “This child is absolutely everything.”

Made Possible by Parents Who Understand

Their son, P.J., now 9, has been in and out of CHOP since he was 10 months old because of a rare immunodeficiency disorder. So Alexia and Christian Gottschalch understand how it feels. To wake up in your child’s room, exhausted, and try to ask questions of doctors during morning rounds. To look in the mirror and wonder if things will ever be normal. To just barely cope, all of the time.

“I remember thinking one day, ‘If only I could blow-dry my hair,’” Alexia Gottschalch recalls. And she had an idea: What if the Hospital had a traveling salon? “You feel better when you look better,” she says. “You suddenly feel like a person again.” Two years later, the Salon Services Program is bringing joy to patients and caregivers. A donation from the Gottschalchs, parents who understand, got the program off the ground.