It is well known that having a baby in the neonatal intensive care unit is a highly stressful experience for parents, and rates of parental anxiety and depression are routinely shown to be higher than for parents in the general population.

One specific stressor for NICU parents is separation from their infant when parents cannot be at the hospital. This separation is an unnatural phenomenon, as infancy is a critical time for parents to transition to their parental role, and for building parent-infant relationships. In fact, studies suggest that parental distance from the hospital predicts increased stress levels. 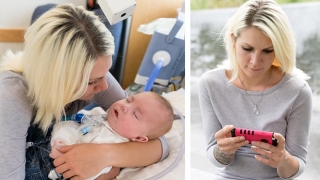 Kristen Jankowski used the N/IICU cameras to stay close to her son Vinny, 4 months, when she wasn’t able to be at his bedside. Telehealth approaches are increasingly used in the hospital to bridge distances, and it has been suggested that telehealth may increase feelings of connectedness between parents and hospitalized infants. However, the impact of telehealth on parental stress has not yet been well studied. Therefore, as part of a quality improvement project in CHOP’s Harriet and Ronald Lassin Newborn/Infant Intensive Care Unit (N/IICU), we installed bedside web cameras and sought to determine if their use might be related to lower levels of parental stress*.

Cameras were installed at all bedsides in the N/IICU in 2018, and access to the one-way visual-only cameras was offered to each family upon infant admission. Over a three-month period, a random sample of 114 families participated in the project, which included answering questions about their use of the camera as well as completing a validated parent stress scale for this population (the Parent Stress Scale-NICU).

Relationship between bedside camera use and parental stress

Just under half of the parents who responded to the questions about their use of the bedside camera reported using the camera. Those who used the camera reported significantly less stress in the areas of relationship with their infant/parental role, the NICU environment, and infant appearance.

These results indicate that telehealth could offer one promising intervention to decrease stress among NICU parents when separated from their infant. More work remains to be done to understand the differences between parents who do or do not utilize the bedside cameras, and to determine if the intervention is more helpful for some parents than others. 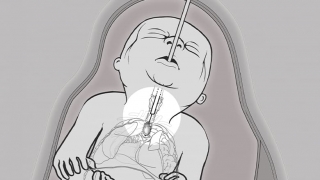 Our team offers a wide array of treatment options and resources to support families who turn to us for expert care when expecting a baby with CDH.

The Pulmonary Hypoplasia Program provides ongoing developmental and medical assessments from infancy through adolescence, with the goal of improving long-term quality of life.

Early recognition, treatment and management of CDH-related pulmonary hypertension is critical. An early and aggressive approach to treatment has proven successful.