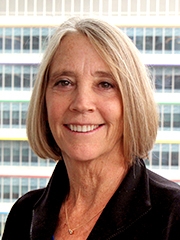 Beverly Davidson, PhD Beverly L. Davidson, PhD, director of the Raymond G. Perelman Center for Cellular and Molecular Therapeutics (CCMT) at Children’s Hospital of Philadelphia (CHOP), and a Professor of Pathology and Laboratory Medicine in the Perelman School of Medicine at the University of Pennsylvania, has been elected into the National Academy of Medicine (NAM), effective October 1, 2019.

Members of the NAM annually select a number of professionals to honor exceptional achievements in health and medicine. Davidson was recognized for “being on the forefront of developing innovative therapies and medicines for fatal, inherited brain disorders, which are engineered to either remove toxic proteins or replace missing proteins, and for improving or preventing disease progression.”

“Being elected to the National Academy of Medicine is truly an honor, and I am exceptionally proud to represent Children’s Hospital of Philadelphia and the University of Pennsylvania in the Academy’s missions,” said Davidson. “I am very much looking forward to working with the Academy and its members in the years ahead.”

“Dr. Davidson is a national and international leader in investigating innovative treatments for devastating, currently untreatable neurological diseases,” said Robert Doms, MD, Pathologist-in-Chief and chair of the Department of Pathology and Laboratory Medicine at CHOP. “Her research is at the forefront of 21st century medicine, and her lab is providing remarkable bioengineering tools to bring breakthrough treatments to patients. This is an exciting time to be in biomedical research.”

Davidson’s research focuses on understanding the molecular basis of neurodegeneration in inherited brain disorders, as well as working to develop novel molecular medicines to mitigate disease in affected patients. Her laboratory pioneered the design and application of gene-lowering technologies for the treatment of dominant disorders, such as Huntington’s disease and spinocerebellar ataxias, using RNA interference and more recently, gene-editing technologies. Her group also devised novel approaches and vector systems to accomplish gene replacement in disorders affecting children who are deficient in lysosomal enzymes crucial to brain development and function.

Davidson holds research grants from the National Institutes of Health (NIH) and has authored hundreds of scientific publications. She was recently elected to the American Academy of Arts and Sciences, and serves as Vice President of the American Society of Gene and Cell Therapy. In addition to leading CHOP’s CCMT, she is also the Chief Scientific Strategy Officer at the Children’s Hospital of Philadelphia Research Institute and holds the Arthur V. Meigs Chair in Pediatrics.

Davidson earned a PhD in biological chemistry from the University of Michigan. Before joining CHOP in 2014, she held the Roy J. Carver Biomedical Research Chair at the University of Iowa, and was the Vice Chair for Research in the Department of Internal Medicine.

Other honors and recognitions have included the Mathilde Solowey Award (NIH), the S.J. DeArmond Lecturer (American Association of Neuropathologists) and the 2011 Presidential Lecture (Univ. of Iowa). Davidson is also a member of the Scientific Advisory Board of the Hereditary Disease Foundation, and was appointed to the National Advisory Council for the National Institute of Neurological Disorders and Stroke, as well as the Scientific Advisory Board of the Huntington Study Group and the Medical Research Advisory Board of the National Ataxia Foundation. In 2017 she was appointed a member of the International Selection Committee for the 2018 Bower Award and Prize for Achievement in Science at the Franklin Institute and received the F.E. Bennett Memorial Lectureship Award of the American Neurological Association.

Davidson joins another CHOP faculty member, Stephan Grupp, MD, PhD, elected this year to the NAM. As Chief of the Cell Therapy and Transplant Section in the Division of Oncology and Director of the Cancer Immunotherapy Program at CHOP, and Professor of Pediatrics in the Perelman School of Medicine at the University of Pennsylvania, Grupp has led successful clinical trials of CAR T-cell therapy for children and young adults with relapsed and refractory acute lymphoblastic leukemia.

“CHOP has the brightest minds in cellular and gene therapy under one roof, coupled with unparalleled experience with the first-to-market approved gene therapies, and our unique infrastructure ¬that makes it possible to deliver these therapies,” said Bryan Wolf, MD, PhD, Executive Vice President, Children’s Hospital of Philadelphia and Chief Scientific Officer at the Children’s Hospital of Philadelphia Research Institute. “All of this powers our pediatric research hospital to aggressively pursue and lead treatment breakthroughs. Dr. Davidson’s and Dr. Grupp’s elections to the National Academy of Medicine are very well deserved.”

Since 1970, the NAM has annually elected exceptional individuals for outstanding contributions to health and medicine. This year 100 new members have been chosen for this prestigious honor.

New members will be formally welcomed to the NAM during next year’s annual meeting, which is also NAM’s 50th anniversary, scheduled for October 2020.