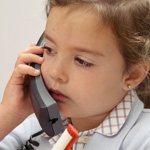 Nosebleeds aren’t just the result of an unfortunate run-in with the playground bully. While a knock to the nose certainly can cause a bleed, nosebleeds usually occur when the protective lining of the nose is dry or irritated. Most often they are caused by picking, blowing too hard or breathing dry air.

Here are some other causes of nosebleeds:

How to stop a nosebleed

Rarely do nosebleeds require a visit to the doctor. However, if your child experiences the following, you should call his pediatrician: