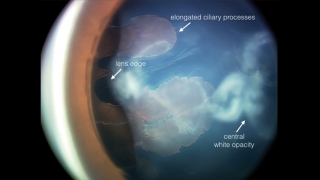 Image 1 A 3-year-old was referred for right-eye tearing (VA Right: 20/200, Left: 20/25). An exam revealed a smaller right eye with a 10 mm corneal diameter. The iris was irregular, with several areas of peripheral anterior synechiae. The lens had a visually significant posterior capsule plaque with vessels. Several pigmented processes extending from the ciliary body were noted on the posterior lens surface (Image 1). The lens had several notches at its edge. Fundus exam revealed a dysplastic optic nerve from which a stalk was emanating. 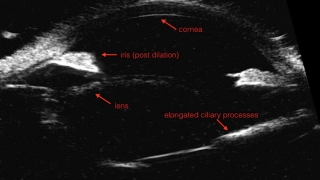 These findings were most consistent with a diagnosis of persistent fetal vasculature (PFV). PFV is a congenital anomaly caused by failure of the fetal vasculature, which nourishes the anterior segment in utero, to regress. Almost always unilateral, these eyes are typically small. A remnant vessel stalk may be visualized coursing from the optic nerve head to the posterior surface of the lens.

Frequently, a surgical intervention is suggested in the hopes of improving the visual outcome. Typically, the clouded lens (cataract) is removed, and occasionally, retinal traction is released.

Despite surgical intervention, it is rare for an eye with PFV to achieve normal vision.

This case exemplifies just a few of the remarkable testing and imaging modalities at CHOP’s Ophthalmology Diagnostic Center. The center is used daily to assist in the diagnosis and management of many of our patients with diverse medical and ocular issues.