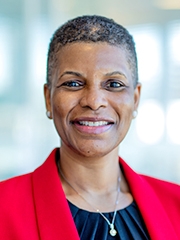 “We are delighted to welcome Sophia to the CHOP family,” said Madeline Bell, President and CEO of Children’s Hospital of Philadelphia. “She not only brings the technical competencies to succeed in this role, but she has also demonstrated a personal commitment to developing people and leading teams, two invaluable skills that will help further CHOP’s mission of transforming care and improving the lives of children.”

As Executive Vice President and Chief Financial Officer, Sophia will work with CHOP leadership to ensure the hospital thrives in an evolving healthcare ecosystem, while maintaining its focus on groundbreaking research, family-centered care, education and advocacy. She will oversee all financial functions in support of the institution, upholding a culture of collaboration, transparency, and accountability.

In her role at Boston Children’s, Sophia spearheaded employee engagement efforts in Finance and was an active participant in efforts associated with the enterprise’s Equity Diversity and Inclusion (EDI) goals. She sponsored Enterprise Resource Planning (ERP) system implementations, co-led initiatives to implement new Enterprise Performance Management (EPM) solutions, as well as executed a number of process improvement initiatives that supported operational excellence goals for the hospital.

Before joining Boston Children’s, Sophia spent six years at the University of Vermont Medical Center, where she served as the Vice President for Finance, as well as the Interim Chief Financial Officer. While at the University of Vermont Medical Center, she participated in councils and committees that supported projects to integrate, align, coordinate and consolidate affiliate partners within University of Vermont Health Network. She began her healthcare career at Mass General Brigham in Boston, where she held numerous leadership positions, including serving as the Controller of the Brigham and Women’s Faulkner Hospital.

Throughout her career, Sophia has maintained a passion for mentoring and developing next generation leaders, as well as serving and supporting the community, with a focus on the underserved.

Sophia received a Bachelor of Arts degree in psychology, with a minor in business administration, from Boston University, earning a CPA at the start of her distinguished career in accounting and finance. Sophia is a member of the National Association of Health Services Executives, the Healthcare Financial Management Association, and Chief, a private organization specifically designed for senior women leaders to strengthen their skills and promote the exchange of leadership ideas.

Sophia replaces Chief Financial Officer Tom Todorow, who is retiring after 20 years of service to CHOP.