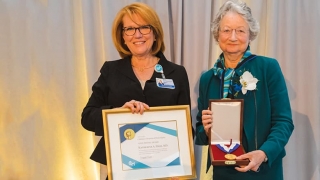 In an honor reserved for only the most significant achievements in advancing children’s health, Children’s Hospital of Philadelphia (CHOP) has awarded its Gold Medal to Katherine High, MD, a gene therapy pioneer and one of the lead developers of the first in vivo gene therapy approved by the Food and Drug Administration (FDA). Bestowed only 12 times in CHOP’s 166-year history, the Gold Medal highlights Dr. High’s groundbreaking discoveries at CHOP, which led to a gene therapy treatment for a rare form of inherited blindness and advanced gene therapy for hemophilia to late-stage testing.

“It is a tremendous honor and a distinct pleasure to present this award to Katherine High, an inspirational scientist who did something that few thought possible: developing gene therapies and taking them from bench to bedside,” said Madeline Bell, President and CEO of Children’s Hospital of Philadelphia. “Through her innovative vision, she and her colleagues restored the vision of others, helping children around the world and laying the foundation for future breakthroughs for those with genetic diseases. Her hemophilia research has revolutionized the field, bringing ‘once and done’ therapy for this bleeding disease one step closer to reality.”

Last awarded in 2006, the CHOP Gold Medal is given to individuals or institutions that have improved the health and welfare of children by making significant discoveries in medicine, surgery, and other specialties; psychiatry and social sciences; education; and research. The award was created to recognize transformative achievements that are making an impact across the globe.

Dr. High came to CHOP in 1992 from the University of North Carolina – Chapel Hill, where she was a faculty member and hematologist studying the potential use of gene therapy to treat hemophilia. She had watched the gene therapy industry move through its quiet childhood and then struggle through a difficult adolescence, but despite the loss of interest from pharmaceutical drug developers after a series of adverse events in the field, she still believed in the potential of treating genetic diseases with therapy that would replace a missing or defective gene with a healthy one.

At CHOP, she continued her exploration of hemophilia gene therapy as the head of hematology research, but she ran into roadblocks as companies turned away from gene therapy and stopped manufacturing gene therapy vectors, the vehicle that delivers a healthy copy of a defective gene to patients. Dr. High then did something unprecedented: she decided she wanted to produce her own vectors at CHOP in order to continue her gene therapy research. This innovative thinking led to the establishment of CHOP’s Center for Cellular and Molecular Therapeutics (CCMT) in 2004.

As Dr. High continued to pioneer the field of gene therapy for hemophilia, she embarked on a collaboration with University of Pennsylvania colleagues Jean Bennett, MD, PhD and Albert M. Maguire, MD, who were testing gene therapy in animals with Leber’s congenital amaurosis (LCA), a genetic condition that eventually causes blindness. The condition also occurs in humans; children are born with a lack of light sensitivity, which at first prevents them from seeing in dim light and eventually progresses to full blindness.

Convinced that gene therapy could be used to treat patients with LCA, Dr. High secured funding from CHOP to test the experimental therapy in a clinical trial. In 2005, she began working with Dr. Bennett’s lab to develop a clinical gene therapy vector to treat LCA, which would be injected into a space behind the eye. Then, in 2007, the first patient with LCA was enrolled in a clinical trial sponsored by the CHOP CCMT to test the therapy.

Dr. High remained at Spark until 2020, and in 2021 she joined AskBio as President of Therapeutics and member of the AskBio Board of Directors. She continues to investigate the use of gene therapy to treat numerous genetic diseases.

“I am so grateful to receive this award from CHOP, my home for more than two decades,” Dr. High said. “CHOP allowed me to focus on my research, and again and again provided invaluable support at crucial junctures that allowed me to take the next step and bring gene therapy to patients. The hospital’s focus on and interest in translational work was critical in allowing me to pursue my research.”

While at CHOP, Dr. High was also an investigator of the Howard Hughes Medical Institute, in addition to serving as a faculty member at the University of Pennsylvania’s Perelman School of Medicine. She served a five-year term on the U.S. Food and Drug Administration Advisory Committee on Cell, Tissue and Gene Therapies and is a past president of the American Society of Gene & Cell Therapy (ASGCT). She is an elected member of the National Academy of Medicine, the National Academy of Sciences, the American Academy of Arts and Sciences, and the faculty of Pharmaceutical Medicine of the Royal College of Physicians in London.