One of the only nonprofit milk banks inside a U.S. freestanding children's hospital 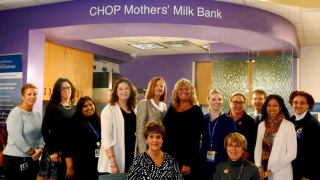 “This is a great advancement for our families who have newborns or infants who are being cared for in the Newborn/Infant Intensive Care Unit," said Chad Hough, interim COO and senior vice president of Clinical Support Services at CHOP. “Mothers who may not be able to nurse their child will now have faster access to some of the best medicine their baby can receive.”

Human milk is the recommended form of nutrition for all infants. Almost all mothers can fully breastfeed or provide expressed milk for their children. However, if a mother is unable to provide 100 percent of her child’s needs, CHOP has offered pasteurized donor human milk to serve as a bridge to the mother’s own milk since 2006. Until recently, the donor milk used at CHOP was purchased from another HMBANA milk bank.

Annually, the mothers of CHOP patients donate on average of 22,000 ounces of milk to HMBANA milk banks. CHOP partnered with the Ohio Mothers’ Milk Bank to facilitate the donations and coordinate shipping the donated milk to Columbus, Ohio. With the opening of the CHOP Mothers’ Milk Bank, the mothers of CHOP patients will now be able to directly donate their milk on-site.

“Our mothers are so dedicated to pumping milk for their children and because of the diligence and commitment to pumping, many families end up with a full freezer of milk that their child will not ever need. Knowing that they can help other vulnerable infants at CHOP is so meaningful” said Diane Spatz, PhD, RN-BC, FANN, nurse researcher and director of lactation at CHOP.  Dr. Spatz also stated “by being able to screen and approve donors on site as well as pasteurize the milk in-house it greatly enhances the family experience.”

CHOP’s clinical teams use pasteurized donor human milk for a variety of conditions including prematurity, allergies, feeding intolerance, immunologic deficiencies, post-operative nutrition, treatment of some infectious diseases, and treatment of certain inborn errors of metabolism. CHOP is also unique in that the policy states parental preference as an indication for the use of donor human milk. Human milk strengthens an infant’s immune system to help fight disease and infection. Human milk also contains growth hormones to develop the infant’s intestinal system and is easier to digest than formula. Infants who receive human milk also have better health and neurodevelopmental outcomes. Donor human milk is viewed as a bridge to the mother’s own milk. Through the use of donor human milk, CHOP is able to support a family’s decision to provide an exclusive human milk for the infant while in the hospital.

Donations to be phased in, donors screened

Donations to the CHOP MMB will be phased in three stages, with the first donors being CHOP inpatients’ own mothers. The hospital will then accept donations from inpatients’ mothers and CHOP employees (stage 2), and will finally accept milk from people in the community in the coming months (stage 3). In order to become a HMBANA milk donor, the mother must meet strict donor criteria to ensure that she is healthy and the milk is safe. Donors must complete a medical history and lifestyle questionnaire and obtain the approval of their healthcare provider prior to donating milk, as well as have a blood test completed to screen for diseases including HIV, HTLV, hepatitis B and C, and syphilis.  Following screening, approval, and blood testing, the donated milk is heat treated using the Holder pasteurization method.