The Children’s Hospital of Philadelphia (CHOP) unveiled a portrait of Ruth M. and Tristram C. Colket Jr. in October to honor their more than 40 years of extraordinary dedication to CHOP. 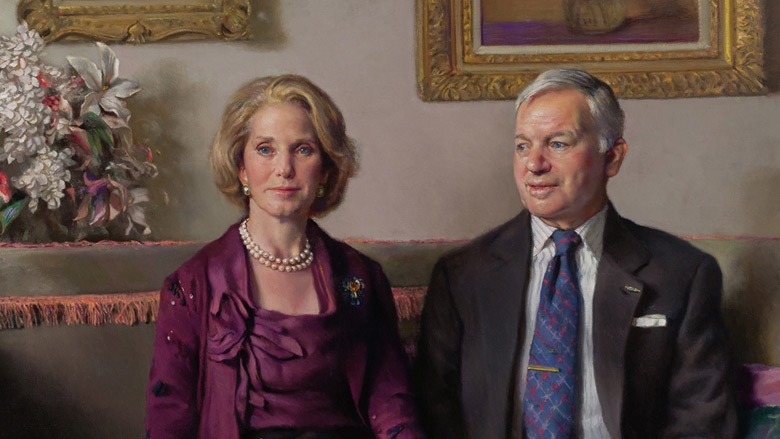 “Ruth and Tris Colket are exemplary philanthropists,” said Steven M. Altschuler, MD, chief executive officer of The Children’s Hospital of Philadelphia. “For more than 40 years, they have committed their expertise, time and support to The Children’s Hospital of Philadelphia. The portrait of Ruth and Tris is a fitting and permanent tribute to two very special people who have made a transformative difference at CHOP — and in children’s health around the world.”

The Colkets’ combined leadership has helped to influence and nurture the institution’s growth in every sphere. Ruth Colket is a CHOP Trustee Emerita, as well as a former president and member of the Women’s Committee for more than four decades. Ruth and Tris served as honorary co-chairs of the Hospital’s “Hope Lives Here” capital campaign. Tris Colket has served on CHOP’s Board of Trustees since 1969. He was also a longstanding chairman of the CHOP Research Institute.

The Colkets have also been extraordinarily generous philanthropists. In 2006, Ruth and Tris Colket provided a transformational gift, one of the largest in the Hospital’s history, to support research through construction of the Ruth and Tristram Colket, Jr. Translational Research Building. Two of the Hospital’s atria — in its Main building and in the Leonard and Madlyn Abramson Pediatric Research Center — are named in recognition of their generosity.

The Colkets’ portrait will be displayed in the Hospital’s Colket Translational Research Building on the Raymond G. Perelman Campus. The portrait was commissioned from renowned artist Nelson Shanks, whose work depicting celebrities, royalty and political leaders has been featured in exhibitions around the world.