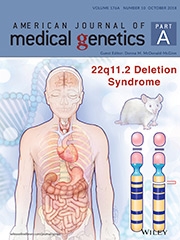 The majority of the authors are members of CHOP’s 22q and You Center, which includes multiple pediatric and surgical subspecialists from across the institution, reflecting the multisystem nature of the condition.

The special issue features a cover illustrating the condition, and 19 papers, mostly led by CHOP authors, but also written in collaboration with colleagues from Penn Medicine, as well as scientists from other institutions. The topics included a general genetics overview of the condition, cancer predisposition and hematology, cardiology, endocrinology, fetal medicine, immunology, neurology, orthopaedics, otolaryngology (ENT) and surgery. In addition, the special issue addressed associated psychiatric conditions, neurodevelopment and the psychosocial impacts associated with 22q11.2 DS.

Donna M. McDonald-McGinn, MS, LCGC Resulting from the loss of about 50 genes on chromosome 22, the condition is the most common microdeletion syndrome, estimated to occur in about 1 in 2,000 to 1 in 6,000 live births, and in about 1 in 1,000 pregnancies. That means there could be as many as 150,000 Americans with the condition, including roughly 35,000 children and adolescents, said Donna M. McDonald-McGinn, MS, LCGC, Director of the 22q and You Center.

Importance of early diagnosis of 22q11.2

“Families continue to traverse a diagnostic odyssey, often with adverse consequences over a protracted period,” said McDonald-McGinn. Failure to recognize the condition, unfamiliarity with current testing methods, and the wide variability of the condition often combine to delay diagnosis, she said, adding that adults with 22q11.2 DS may come to attention only after the birth of a child with related anomalies, such as heart disease. “This special issue highlights our prediction that early diagnosis of 22q11.2 will result in better outcomes.”

McDonald-McGinn served as the invited guest editor for this special issue, wrote the introductory editorial, and was a corresponding author of multiple papers, including a review article that summarized the current state of scientific knowledge. Based on data from 1,421 patients followed by the 22q and You Center at CHOP beginning in 1992, this paper is the largest-ever longitudinal study focusing on this condition.

“Our review article is a hallmark of CHOP’s role as the global leader in studying and caring for patients with 22q11.2 DS, as well as in leading innovative research initiatives,” said McDonald-McGinn. The 22q and You Center is the world’s largest center specializing in comprehensive, multidisciplinary care for patients and families affected by the condition. She added that over half of the patients seen at the 22q and You Center live more than 100 miles from Philadelphia, including patients referred from around the world.

Read the review article: “What is new with 22q? An update from the 22q and You Center at the Children’s Hospital of Philadelphia.”