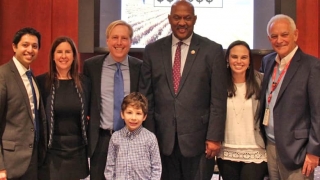 Celiac disease is common, affecting 3 million Americans, including an estimated 129,000 Pennsylvanians and 16,000 Philadelphians, and researchers shows that celiac disease prevalence is doubling approximately every 15 years – making it a public health epidemic. Recently, Arunjot Singh, MD, MPH, attending physician at CHOP’s Division of Gastroenterology, Hepatology, and Nutrition and the co-director of the Center for Celiac Disease, participated in a congressional briefing at the U.S. Capitol Visitor Center with Jax Bari and his parents to help convince Congress to increase funding for celiac disease research.

Celiac disease consistently receives approximately $3 million per year, the lowest amount of funding over a 5-year period from the National Institute of Health (NIH) as compared to other gastrointestinal diseases. To strengthen their case for increased funding, clinicians and families from Children’s National Medical Center joined Dr. Singh and the Bari family and presented strong evidence to Congressmen Dwight Evans and John Joyce, MD, about how increasing federal funding to $100 million per year would advance medical research, with the goal of finding new treatment options for people with celiac disease.

“We met numerous other staff who work on the [Capitol] Hill and learned about their own stories and connections to celiac disease, and they were excited to join the fight for a cure,” said Dr. Singh. “Increasing research funding for celiac disease would allow tremendous progress in understanding all autoimmune diseases and particularly give hope to those three million Americans with celiac disease who wish to live beyond a gluten-free diet.” The Bari family discussed the lifetime treatment burden of the gluten-free diet, including the continuous concern over intestinal healing, proper nutrition, cross-contamination, and inclusion in their child’s numerous daily activities that involve food at home and school, or anywhere else.

“Celiac patients and their families are in a constant state of food insecurity. Imagine being a child and not being able to eat pizza and cake at every birthday party you attend or at school when special treats are being served,” said Leslie. “It's very difficult emotionally as well since we always feel like Jax is deprived of so many food items that he sees others around him enjoying.” When the Bari family met with Congresswoman Madeleine Dean in her office after the briefing, she asked Jax what people should know about celiac disease. According to his mother, Jax answered, “That it’s no joke.”

Gluten ingestion for people with celiac disease causes permanent immunological scarring, doubles the risk of heart disease, and acts as a carcinogen. CHOP has many clinical trials underway and has goals to advance medical research and find a cure for celiac disease.